Why Vote for Jerry Brown for Governor of California 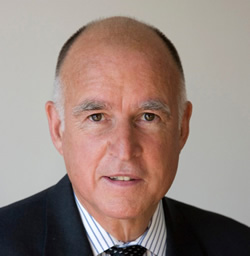 
Jerry Brown was a California governor with vision, integrity and high ability twice in my book. Created 1.9 million new jobs, founded California Conservation Corps with Paul Hawken, kept something like a balanced budget – and put California in history books as perhaps THE leader of a movement toward sustainable living. Healing of the planet. This and he is dedicated to social and economic justice, concepts many don’t know - but they are real living principles to him available in his speeches, but also in his work. I heartily agree with Jerry when he says California is a state of imagination.

If elected to a third term in November, he’ll inherit a humongous deficit, a public hurting badly from job loss and home foreclosures, a struggling education system and a “crime-prison” industry that functions like “the best run hotel in the world with 10,000 people coming in every year and 10,000 people going out,” he said in an interview with Eric Schmidt, CEO of Google, available at TalksatGoogle online http://www.youtube.com/watch?v=I-ndAoifYyE&feature=related. Fine, even memorable interview.

“I run a very frugal operation, I think,” said Jerry to Eric in April. Eric had phoned Jerry – and he answered his own phone. “I like to know who is calling,” he explained. He gave a detailed picture of the challenges facing the next Governor of California in a calm clear manner. Unlike his opponent, corporate CEO, Meg Whitman, Jerry explained that California government is a place where you can’t fire people, you have to learn to work with them, with their unions. You have to learn to represent the people, not the stock holders.

As a Jesuit initiate, he learned not only personal discipline but also the principles of social and economic justice which he later translated into real concrete change for the city of Oakland as its Mayor. 10,000 new residents downtown; murders and violent crime declined significantly in this high crime city, and the new charter schools he created are very successful.

He’s been there as Governor two terms – and his current job as Attorney General gives him an overview of what happens to legislation after it is made into law, very often into contentious arbitration. “I’ve learned to have a healthy distaste for legislation,” he says of the process. Yet he’s a public servant willing to put himself in the lion’s den yet again.

Jerry says Meg Whitman is waffling on AB32, “the state global warming law that technology leaders believe can propel California into the forefront of the world's green economy,” according to an editorial in the San Jose Mercury News. Those who oppose AB32, created Prop 23, on November’s ballot, which would overturn the law, saying it cannot be applied until the state has an unemployment rate not likely to be reached for years. It will take strong support for this urgently needed legislation to be implemented.

When Governor Arnold Schwarznegger signed AB32 in 2006, he claimed
"Using market-based incentives, we will reduce carbon emissions to 1990 levels by the year 2020. That's a 25 percent reduction. And by 2050, we will reduce emissions to 80 percent below 1990 levels. We simply must do everything in our power to slow down global warming before it's too late."

Chip Atkin, at Rebuild California, a campaign to restore California’s economy and more, http://www.youtube.com/watch?v=I-ndAoifYyE&feature=related said that “The future with Meg Whitman as governor will perpetuate … decline of our state. Wall Street Whitman mistakes the needs of big business with the needs of all the people of California. She will cut services designed to benefit the general public or the poor, in order to enrich corporations.

Jerry Brown, who trained as a Jesuit priest, came to politics with an ethic of community service. As Governor, he lived frugally, rejecting use of government limos and mansions. He presided over a vibrant economy that included regulations to promote energy conservation. He created 1.9 million jobs and returned $4 billion in tax cuts. He respected workers by giving government and school workers collective bargaining.”

This is the Jerry Brown I have personally discussed/argued with about what makes a good education; this is the Jerry Brown who says education should be our first priority. I concur with former president Bill Clinton, when he said recently “I strongly support Jerry Brown for Governor because I believe he was a fine Mayor of Oakland, he’s been a very good Attorney General, and he would be an excellent Governor at a time when California needs his creativity and fiscal prudence.”