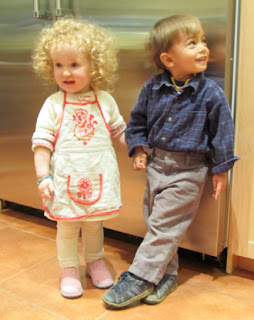 The Magic of Two-Year-Olds
By Shepherd Bliss

The biggest surprise of my 2010 was relationships with four unrelated two-year-olds, who are so full of magic and life-giving vitality. I am 66-years-old and have never had two-year-olds in my adult life. They have become this college teacher’s teacher.

I have known Ruby since her birth. I remember when a dozen adults commemorated the passage of Diana seven years after her death. Our sadness differed from Little Miss Goldilocks, as some call Ruby, who was bubbly and buoyant. I known that death and life are theoretically connected, but there it was in her presence and continuing enthusiastic participation in life. Ruby’s energy managed to shift ours and lift our sadness to joy as we remembered the good life that Diana had. Children belong not only at weddings, but also at funerals and memorial services.

River came to my farm one day, and we immediately recognized each other as kin. River re-parents me, though I am thirty-three times as old as he. He radiates contact with some primordial energy that was there before we arrived and will continue after we expire. He tends to unite people and draw their attention closer to the ground as they watch him interact. Yet when he visits my classes he sits calmly in one of his parent’s laps and seems to give even deeper attention than some of my adolescent students.

When we play together people ask if I am the grandfather, since there is a physical resemblance, given our olive skins and long eyelashes. I just smile in response.

Ruby is one of River’s “girlfriends.” They have such a unique dance when they see each other, open their arms, and move toward each other. They even hug and kiss.

River’s French grandparents recently visited. They modeled the importance of the grandparent-grandchild relationship. These two-year-olds evoke the grandfather archetype in me, which feels as if it has a biological base. I do not have my own children.

Nor did I not have grandfathers. Lightning struck one dead on our Iowa family farm as he went out to get his son. The other, whose name I bear, being the third in this line-up, was thought to be dead. But in my thirties we got a letter from him, in his long search for his first-born son. “I’m too old to start having a father,” my father responded, since he had been told that his father had abandoned him as an infant. I, however, responded, and we struck up a good conversation. My brother even met our grandfather, and liked him. “Deceased” was on the envelope of my last letter to him, as we were planning to meet.

Such memories return as I think about the grandfather energy, and how important it can be, and why I refused to father a child. Fortunately, I had wonderful uncles, on my mother’s side, especially my farming Uncle Dale. He was my sweet masculine model. 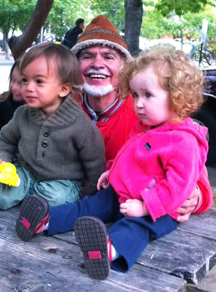 Opal came to me through River when we were at a farmers’ market. She began following River. Like Ruby, Opal is blonde and bright blue-eyed. River and Opal recently connected for some Christmas music. River got there first with his dad Laurent. When I arrived they were sitting on the floor together. After a while Laurent wanted to buy some books, so he placed a meditative River in my lap. Then Opal arrived; she got very excited and started jumping up and down when she saw River, who looked at her and then back to the calming music. Opal had so much excitement at seeing River that she did not come very close—electricity in the air--but walked around him into the store, smiling and looking his way, as if inviting him to follow. This come forward/go back went on for around half an hour, much to the delight of others in the store. They finally touched, but only briefly.

We then went to a restaurant to eat. By this time River was getting more excited. After eating he would alternately chase Opal around the restaurant and lead her on, again to the delight of the adults there. Once outside on the grass, the chase continued as they climbed up the “mountain” where I was standing guard, keeping them away from the road, and would send them down.

River initiated the “All Fall Down” game, verbally and physically. Opal would repeat the words, but did not seem to understand them at first, or fall down. Eventually she did fall down on the grass. It was as if they were bowing with devotion to the ground that holds all of us up. I watch how quickly they learn, especially from each other, if they are protected by adults, but not over-protected. They fall and with the aid of those flexible spines get up again. By falling we can learn how to be flexible and get back up.

Opal and River also ended up hugging and kissing. Both Ruby and Opal seem to take more initiative toward River, who alternately holds back, responds, and takes some initiative.

At Ruby’s recent second birthday party I met Asher, the youngest of this gang. He came toward me with his arms outreached, as if he recognized me. I instinctively bowed to him and opened my arms, picking him up. He promptly laid his head on my shoulders, which he did a few other times that night, both of us with large smiles. I later invited Asher and parents to a night-time boat festival on the Petaluma River. His eyes were full and his smile bright, as he pointed at one boat after another that came by, drawing our collective attention. His joy ignited our joy.

There is so much that I adore about these four young ones. I teach communication to college students. Each of these children, in their own unique ways, are peak communicators. They radiate connection, curiosity, sweetness, tenderness, and vulnerability. They have a lot to teach adults, as well as other children. It reminds me of the phrase from the old book, “Be ye not like a child, you will not get into the Kingdom of Heaven.”

There is another side to this story of my growing attention to two-year-olds. The recent death of two-year-old Callie Murray hit me hard. She would have been three on the day that I began writing this, Dec. 25, the birthday of baby Jesus. She was walking across the street hand-and-hand with her mom Ling Murray on Dec. 1. A student from Sonoma State University, where I teach, who was using a phone in her car at the time, crashed into them, killing tiny Callie and severely injuring her mother.

Since then I have had trouble getting that crash out of my mind and my nightmares, so I have been talking to my students about the dangers of texting and cell phones. May tiny Callie’s tragic death guide us to appropriate behavior. May we adults cherish and nourish the life that all young ones bring into the world and care for them.

I look forward to seeing each of my two-year-old friends again into whatever future might remain for me. So however old you may be, it is not too old to have young children in your life, to enjoy them, and be part of the village that we all need—young and old. They need us and we need them.

My 78-year-old friend Doug Von Koss recently sent me the following that James Broughton wrote on his 80th birthday: "Stand firmly, sit serenely, mutter profoundly, sing outrageously and dance all the way to your death."

Shepherd Bliss teaches at Sonoma State University, has maintained a farm in the Sebastopol countryside since l992, and can be reached at sb3@pon.net