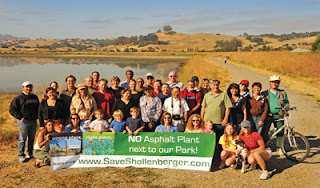 Frustrated and Disappointed by Supervisors’ Approval
The City of Petaluma and a large coalition of citizen groups and individuals have filed a lawsuit challenging the Sonoma County Board of Supervisors' flawed approval on December 14, 2010, of the Dutra Haystack Landing Asphalt and Recycling Plant. The Plaintiffs maintain that the Dutra Asphalt Plant would blight the gateway to Sonoma County and Petaluma, harm the health of residents, businesses and visitors, and negatively impact the development of our local and regional economy. The factory would injure and discourage birds, fish and wildlife which use the Petaluma River and Marsh. Plaintiffs also assert that the Dutra factory operations would also destroy the peace, beauty and appeal of the very popular and adjacent Shollenberger Park.

After actively participating in the County's review and approvals process over the past three years, the City of Petaluma, community organizations including the Petaluma River Council, Friends of Shollenberger Park, Madrone Audubon Society and Petaluma Tomorrow, along with thousands of individual citizens, are frustrated and disappointed that this project has been approved. The Plaintiffs have exhausted all other remedies with the County, and are now seeking judicial review of the approvals process and the impacts of the project itself.


The County failed to properly apply the California Environmental Quality Act (CEQA), the county's General Plan, and land use law to identify the impacts caused by the project, to find alternatives that were less harmful, and to mitigate damages that were not otherwise avoidable, as required by the law. The County failed to properly produce the CEQA-required single, clear, comprehensive and comprehensible Environmental Impact Report (EIR) for the entirety of the project.

Multiple Errors and Omissions
• a patchwork of disorganized addenda and conclusions inadequately describing an ever-changing project without supporting analysis;

• failure to accurately and adequately address significant loud noise, odors, toxic and noxious emissions of gases and dusts from the asphalt manufacturing operations;

• the assertion that the project is "river-dependent," when in fact it does not include any barge and tug transport and unloading of rock, gravel and sand at Dutra's properties. The project thus does not qualify for zoning and land use changes, and could be located on a less environmentally-sensitive site.

• the County ignored the fact that sufficient, unused asphalt manufacturing capacity to serve the North Bay region's needs already exists without Dutra's factory, as stated in the Draft EIR.

• the County failed to find any agreement by Shamrock Materials to make their adjacent property and barge landing facilities available to Dutra for receiving, unloading and transporting some 500,000 tons of sand and gravel components for asphalt production. Shamrock, as an integral component of the approved Dutra project, underwent no environmental review, even though the county has required destruction of .48 acre of wetlands on Shamrock's property to construct a conveyor belt to Dutra's site.

• the County failed to honor and abide by the November 1998 Sonoma County voters' decision to protect the Dairy Belt Scenic Corridor against intensification and industrialization of agricultural and commercial lands. This voter-protected Scenic Corridor, in an area paralleling Highway 101 from the Marin County line to the southern edge of Petaluma, includes the Dutra parcels. Instead, the County dismissed the voters' mandate and changed the land use and zoning to give Dutra the industrial designations that they wanted, without seeking the voter approvals required for that change.

100 Years of Abuse, 40 Years of Restoration
After some 100 years of abuse, filling, diking, development and destruction, the tidal wetlands of San Francisco and San Pablo Bays, along with their important tributaries such as the Petaluma River and Marsh, have been undergoing revitalization, renewal, restoration and preservation during the past 40 years.

These tidal wetlands and rivers are essential to our region for fish and wildlife, water quality, recreation, commerce and flood management, and are the foundation of our regions' attractiveness and wealth. Millions of public and private dollars have been invested in the restoration and preservation of the upper Petaluma River and Marsh, including the city-owned Shollenberger Park, Alman Marsh, and the Ellis Creek Water Recycling facility with their popular trails, vistas and wildlife. Building and operating the Dutra asphalt manufacturing factory in the midst of these publicly-owned natural resources would destroy the work done by thousands of people and businesses, striving to return the river gateway for Petaluma and Sonoma County to its vibrant and productive identity.

Brown Act Violations
The County further compounded the erroneous and inadequate project review under CEQA by committing serious Brown Act and procedural violations. The Board of Supervisors denied the public its right to comment on over 100 pages of critical new information released just hours prior to the final meeting. These documents were released without proper notice and distribution to public and agencies which had requested notification. No one from the public, including Petaluma's elected officials, were allowed to comment on the new information prior to the Supervisors vote to approve the project.

The Supervisors also did not properly introduce and approve the two resolutions and ordinance approving the project and the environmental report and changing the land use designations for the site. "We are proud of the important work done by residents, businesses and organizations in Petaluma to protect our community's values, well-being and economy. The City of Petaluma unanimously joins with them to defend and protect our city and the gifts that surround us," said Petaluma Mayor David Glass.

To keep in touch with the progress of this campaign - please visit: http://www.saveshollenberger.com/