Last month I was asked to join a small group of current and former students of Hiroshi Fuchigami, the Department Chair of the Ceramics Department at Santa Rosa Junior College, to lunch to celebrate Hiroshi’s birthday. Dedicated staff member, Nancy Morgan, brought a birthday cake and we all promised not to sing Happy Birthday at the table. The restaurant was the PHO VIETNAM, a beef noodle and soup restaurant in the shopping center at 711 Stony Point Road #8 in Santa Rosa.

This restaurant was started by Michael Nguyen and his wife Dung Phu 10 years ago. Michael perfected and cooked all the recipes for the soups and now the cooks in the restaurant can follow the recipes to maintain the quality of the food. Because of the popularity of the restaurant about three years ago Michael moved to the current location so people wouldn’t have to wait in line to get in. Leann Sin is now the General Manager of the restaurant, leaving Michael and his wife time to do other things. Michael is volunteering at the Vietnam Church and currently teaching youngsters the intricacies of the ‘Lion Dance’. 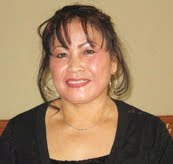 I do like soups and this restaurant has an extensive and very interesting menu. The PHO or beef noodle soups come in three sizes like the porridge served at the home of the three bears: small is $5.50, large is $5.95 and extra large is $7.50. I tried one of their most popular soups, Pho Dac Biet which is a combination noodle soup with eye of the round steak, well done brisket, flank steak, tendon and tripe. The large size is plentiful and there is a side plate with additional vegetables and a stalk of fresh basil for additional seasoning to your taste. There were 17 different selections of PHO soup, mostly beef, but some pork. There was even one with eye of the round and meatballs. In this same price range you can also get chicken soups or just clear chicken broth.

If you prefer fish there are four selections of Hu Tieu Va Mi or seafood noodle soup. The price is $5.95 for small, $6.95 for large and $8.50 for extra large. This selection of soups all have prawns, crab, squid, fish cakes; and two have chicken included. Some of the soups have egg noodles and others rice noodles.

For the vegetarians in the group there are three Do Chay dishes: which combine rice, noodles, vegetables and tofu. These dishes are all $6.50. They also have a special menu for kids which include three choices or soups at $4.50 or Vermicelli with egg rolls or barbeque pork over steamed rice at $4.95. Speaking of Spring Rolls they are offered at appetizers at $4.50.

If soup is not your style you can select from about fifteen other options of various barbequed meats served in bowls with salad, bean sprouts, mixed cilantro and mint leaves, cucumbers and crushed peanuts. Or you can have a rice plate with your selection of barbequed meat or fish. All for $6.50 to $7.50. I can’t begin to describe the 11 kinds of beverages( Giai Khat) made with lemons or coconut milk or plum or soy beans etc. which are available along with a ton of soda options.

I found the food and the service very good and there is a general friendly atmosphere in this restaurant. I interviewed the General Manager, Leann Sin, who has been working there for seven years. She told me the favorite dishes included the Rice Noodle Seafood Soup, the Combo Beef Noodle Soup and the Vermicelli with barbecue prawns, barbecue pork and egg rolls. She also told me about a drink called Che Banh Lot “the little wormies” which she said is made with coconut milk and very tasty. Leann said that along with the standard menu they also have dinner “specials” which include soup and a main course.