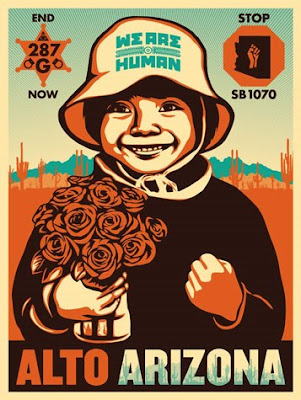 Youth community organizers from the groups IMPACT! and MEChA (Movimiento Estudiantil Chicano de Aztlan) are responding to the recent immigration bill passed in Arizona, SB1070, with a series of activities throughout the summer aimed at educating the community about immigration and building support to repeal the Arizona law and create a “just and humane immigration reform.” These activities include: holding house meetings with the community to discuss immigration, outreach to local businesses to support a boycott of Arizona products, introducing resolutions at the city level to express opposition to Arizona’s bill and support for immigrants’ rights, and a “March for Human Rights” protest on July 29th in Petaluma, the day SB1070 goes into effect.


Taking the lead from immigrant organizers in Arizona who are organizing similar efforts this summer, local youth activists are naming this project “Human Rights Summer,” inspired by the historic Freedom Summer of 1964 which was part of the student-led movement for Civil Rights in the South.


“Laws like SB1070 are not unique to Arizona,” says Sabina Ahmed, a member of IMPACT! “Policies like ‘Secure Communities,’ which Sonoma County has adopted, and 287(g) agreements, take away constitutional rights from immigrants and lead to racial profiling. As students and young people, we oppose all laws that violate civil and human rights.”

Organizers also hope to use Human Rights Summer to build support for ongoing local efforts for migrant justice, including campaigns to stop the impounding of immigrants’ vehicles and the separation of immigrant families, and draw connections between the situation in Arizona and what is happening in Sonoma County.

“I was very proud of the leadership from Supervisors Efren Carrillo and Shirlee Zane regarding their opposition of Arizona’s SB1070,” said Petaluma City Councilwoman, Tiffany Renee. “Assigning immigration responsibilities to local authorities compromises their ability to do their jobs. Detaining people based on suspicions of national origin is reminiscent of 1930s Germany.”

The “March for Human Rights” begins at 6pm on Thursday, July 29th, at McDowell park, off of Park Ln., between Maria Dr. and McGregor Ave. The march will be permitted and peaceful.

*For more information, go to http://www.impactpetaluma.org/