Ride for My Brother - David Copestakes 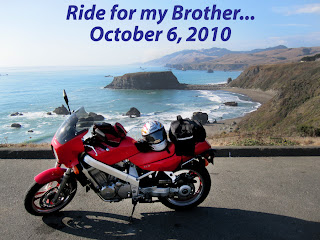 Life is not measured by the amount of breaths we take...
but by the moments that take our breath away.

Celebrating the Life of David Copestakes
October 6, 1956 ~ May 1, 2007
Today would have been my brother's 54th birthday. He loved to ride his motorcycle on the back roads of New Hampshire, so I took him on one of my favorite rides in Sonoma County.

Ride with me baby brother. I will love you always.
Three and one half years ago my brother was killed while riding his motorcycle. A young man driving a dump truck simply backed into the street - right into my baby brother while he was running an errand for his business. He chose to ride his motorcycle for that errand. Maybe if he had been in his truck, he'd be alive today - maybe not. Maybe if the driver of the truck had looked carefully, he would have seen my brother about to pass by. There are many what-ifs when accidents happen - especially of they take the life of someone you love.

After David was killed I paused briefly to decide if I would continue to ride. I had been in a serious motorcycle accident several years prior and had decided to ride again. My brother was proud of me for not surrendering to fear. He was a man who sought experiences. He was a participant, not an observer of life. That phrase above is what was printed on his memorial card because it was his favorite and expressed precisely how he lived his life.

I remember being in wonder when David told me about taking his catamaran out on the Atlantic Ocean and spending the night at sea all by himself. I was in awe when he hiked trails into the wilderness, seeking mountain peaks as goals to achieve. When he turned 50 he asked for my advice - should he throw a big party or spend the money on a motorcycle? Without a doubt, I recommended the bike.

He bought it in New Jersey and decided to ride it home to New Hampshire. The weather was turning cold and was about to rain. I begged him to hire a U-Haul and tuck the bike safely inside to drive home. No - he wanted to ride. When he called me on the road it was dark and very cold and had started to rain. I suggested he find a hotel and wait out the dark - but no - he carried on until he made it safely home. My Bro. He had a goal in mind and he was going to achieve it.

My brother lived only 50 years. When he was born our mother was put into a mental institution and David was raised by Foster parents for his first six years. The next six was pure hell for a child when my mother was released from the hospital and decided she wanted my brother with her. By the time he was 12, my father rescued David and brought him to New England to provide him a stable home and the love of a father and step-mother, Janet. This is where my brother's wounds were healed and he came to grasp a passion for life. He had survived and was grateful.

One of the phrases David used often was “that was then...this is now.” It's how he let go of anything and everything in the past. He placed no blame - he leaned on no excuses or reasons. So many people tell you that the reason they cannot succeed, are filled with fear, etc. is because of the miserable childhood they had. Not my brother, and he certainly could have claimed a truly miserable childhood if he had chosen to. But he didn't. The past was history and it's purpose was to build strength for the future, not to dwell on in the present.

The world lost a wonderful person when David died. He owned a successful business that employed 20 people. He lectured and taught people in his field. He inspired people with his smile and confidence in their abilities. He volunteered for things he believed in. He loved his wife and life partner, Sharon, with all his heart. He loved his family and friends with immense warmth.

When my daughter was young, we read a book about a family who lost their most-loved son. The father forbade anyone from talking about him because it was too painful. But the young man's little sister couldn't help herself. She told stories and recalled memories. Her father was furious and lashed out at her in anger - until - he realized that the stories were bringing his son to life in his painfully twisted heart.  The more stories his daughter told, the more the memories of his son brought warmth, joy and healing to his heart. In time everyone was encouraged to remember the young man with tales of his life and their experiences with him. The father's heart was calmed...his daughter's heart felt the joy of her love for her big brother.

I keep my brother David alive by recalling the sound of his voice....by remembering shared experiences...by recounting all that he was. I know that he will become a mere name in history when all who knew him are no longer on this planet. But while we are, I want to keep as much of him alive as is possible. He LIVES in my heart and mind. I HEAR him talking with me. I took him with me on my ride today so we could share what I love so much.

Look David - here's my favorite place to park and look down the coast...how about we ride to Valley Ford then take the road to Elephant Rock. You'll love it. They just paved it this summer. Nothing but cattle and sheep ranches for miles of perfect hills and curves - then - the reward of Tomales Bay and sun filtered through fog. It's getting cold...we'd better head back.
Thanks for the ride bro. I will love you always. 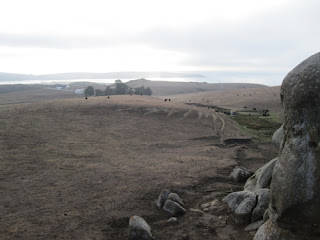