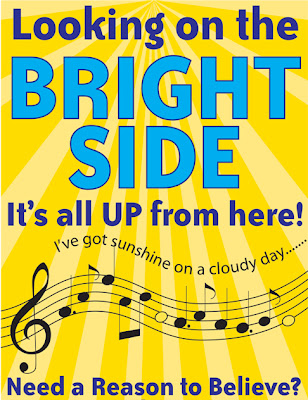 By Vesta Copestakes
OK, it helps to be an optimist - but for those who find it difficult to look at life through rose colored glasses, I’m going to give you a few reasons to feel good...right now!

JOBS: While it’s true that there are more people on unemployment than we’ve seen in a very long time, our government has also been generous about providing unemployment benefits longer than usual. It’s not just a sense of consideration for those in need, it’s also an intelligent way to keep money in circulation. Unemployment checks get taken to the grocery store which not only pays for food, but also pays for employees at the store, etc. What goes around comes around.

AND...some people who have been collecting those checks have also been working odd jobs on the side and coming to the conclusion that they have skills they can sell. If you can’t FIND a job....CREATE a job! As a person who has been self-employed most of my adult life, I can tell you that there is a lot more job security working for numerous clients than one employer. It’s the old cliche about not putting all your eggs in one basket - the more baskets you have, the better!

ENVIRONMENT:
You might be getting frightened by Climate Change, plastic floating in the ocean, acid rain, etc., but think about how far we have come in our consciousness about the environment. When I was young, we had dead rivers. Now we have scientists studying every detail of our environment to turn the tide. Loggers have embraced forest management instead of hating tree-huggers. Fisherman are seeing the logic of taking care of our waterways so they have more fish to catch. Environmental awareness is rising across the planet. It’s simply getting better!

WAR: There was a time when people thought nothing of fighting over ideas, land, money, women...religion. And yes, we still have people who think that way, but they are less and less all the time. We now know that education wipes out not only ignorance, but helps people take care of themselves, their families, and communities. A full belly makes people less hungry for what others have.

I have two theories on how peace will be achieved over time. OK, a long time, but it’s already happening.

As people of various races, nationalities, and religions blend families, we have less reasons to think of each other as Us vs. Them. We’re becoming genetically related. The more we blend, the less we see our differences, and the more we feel connected. It’s hard to kill someone you care about.

Another one of my theories is that we are becoming more economically dependent upon each other. A global economy fosters mutual dependence. The more dependent we are upon each other the less economic sense it makes to fight. We don’t covet what others have...we NEED a mutual exchange of objects and money to make our own lives better. This mutual dependency will make us less likely to have wars.

HUMAN RIGHTS was not even a topic of discussion not that long ago. Now we actually boycott countries if they don’t treat their people right. Economic sanctions have become more powerful than weapons.

Yes, there are still racists and people who hate what they fear. That narrow viewpoint is giving way to tolerance. In my lifetime we went from segregation to inter-racial marriage. From homosexuals hiding in the “closet” to the repeal of Don’t Ask, Don’t Tell and soon, marriage between any two people who love each other It’s coming. It all takes time.

MENTAL ILLNESS: There was a time when “crazy” people were locked away. Now we know that there are ways to help people and we feel compassion for them instead of being afraid of them. PTSD didn’t exist before it was named. “Uncle John’s never been the same since he came back from the war” has become, “we need to help him!” Science and understanding are changing our perspective.

DRUGS AND ALCOHOL: When I was a kid, drinking alcohol was an evening ritual and no one ever talked about Aunt Julie the alcoholic. Now we get on law enforcement’s case for not taking the license away from anyone who has too many DUIs. The first thing investigated at an accident is whether drugs or alcohol was involved. It wasn’t always this way! What was once private shame is now public concern.
BOTTOM LINE: You can be negative and miserable or you can choose to look on the bright side and see that things are getting better all the time. You don’t have to be angry. You can be happy. Who says anger is the only way to effect change - try happiness!