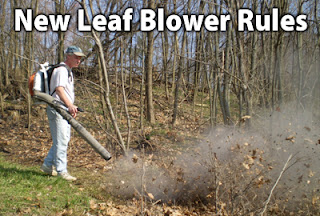 New Leaf Blower Rules
Help Make Sonoma and Sebastopol Quieter and Healthier
By Shepherd Bliss
The March 1, Tuesday, regular Sebastopol City Council now has various options for a leaf blower ban on its agenda. The meeting is open to the public and comments are invited.

One of the Sonoma City Council’s first New Year’s decisions was to preserve the quietness and enhance the health of its residents by prohibiting leaf blowers to operate above 70 decibels. The average new blowers officially operate at 69 decibels. This means that Sonoma citizens can report most leaf blower activity as violating the new ordinance.

Meanwhile, on the other side of the county in Sebastopol, by September sounds above 55 decibels were prohibited, with some exceptions. These two Sonoma County towns have now joined the more than two-dozen California municipalities that have restricted blowers, including Carmel in l975, Los Angeles in l998, and various Marin County cities.

Sonoma Mayor Laurie Gallian reports that she is “actively looking at further reducing decibel levels in the noise ordinance.”

Sonoma has banned blowers on Sundays and on all city-wide holidays, plus Christmas Eve, and the days after New Years and Thanksgiving. Blowers can only be operated during certain hours on other days and cannot be used to blow debris into the streets or onto neighboring properties.

Sebastopol residents requested in 2009 that then Vice-Mayor Guy Wilson ban blowers, which he brought before the City Council. Leaf blowers have been discussed at various council meeting since then and in the media, with most people opposing them because of their documented threats to human and animal health, their rampant contamination of the air, and their noise pollution.

The multiple dangers of the blowers are obvious when one reads their manufacturers’ warnings and recommendations for the protection needed to eyes, ears, the head, feet, and with appropriate clothing. Yet even with all that protection, the blowers’ primary victims are their users. Unprotected by-standers are also at risk.

Former Sonoma Councilmember Larry Barnett, now a columnist for the “Sonoma Valley Sun,” writes the following: “It is long past overdue that these devices of a gas-wasting era were retired.” He points to alternatives—“the humble rake” and “the venerable broom.” Barnett describes leaves as being in “the nature of living with trees.” Some treat leaves as mere nuisances to be blown away. I gather hundreds of bags of leaves every year to serve as life-giving mulch on my small farm.

“A landscape not allowed to nourish itself through natural decomposition,” a landscaper observed, “will grow ever dependent on chemical fertilizers and increasing amounts of water. A leaf blower is not a substitute for a rake … a broom is appropriate for ‘noise sensitive’ areas like hospitals.” He contends that the issue is the improper misuse of the blowers, which do “not always need to be operated at ‘full throttle’ to be effective.”

“I hate leaf blowers,” former Sonoma resident Daedalus Howell commented. “No object exemplifies the worst of civilization (more) than blowers. They seem harmless until one considers all the noise and air pollution and the use of fossil fuels. The blower proves useful only as an instrument of amplifying our ability to waste and ruin. The leaf blower began its repugnant life as an agricultural chemical sprayer.”

The No Blow Movement is growing in the North Bay, Northern California, and beyond. An Internet search for leaf blower bans reveals that a growing number of cities have banned them or are considering banning them. Sonoma County towns would be wise to join this growing movement sooner rather than later.

Among the websites with information are Zero Air Pollution at www.zapla.org and the Quiet Orinda group at www.quietorinda.com.

Sebastopol resident Jonathan Greenberg has also created a video blog at http://www.tv1.com/vlogs/167/posts/246. Videos there contain health facts, and/or show how these machines are over-used and mis-used.

People do not have the right to blow cigarette smoke in our faces nor loud noises into our ears, nor toxic particles into our lungs, all of which damage our health.

Shepherd Bliss teaches at Sonoma State University, has operated a small farm outside Sebastopol since l992, and can be reached at sb3@pon.net.