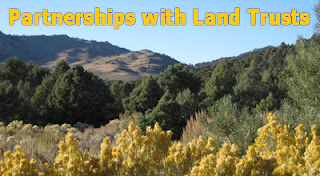 Voluntary conservation of private land received a boost yesterday when President Obama mentioned the work of land trusts in his remarks introducing the landmark America’s Great Outdoors Report at a reception in the East Room of the White House. The collective voices of land trusts, including Solano Land Trust, was reflected in the report, which proposes to extend the enhanced tax incentive for conservation easement donations beyond 2011, fully fund the Land and Water Conservation Fund (LWCF), and focus a portion of LWCF on innovative projects that support urban parks, community green spaces, and large-scale land conservation.

“At a time when America’s open spaces are controlled by a patchwork of groups, from government to land trusts to private citizens, it’s clear that conservation in the 21st century is going to take more than what we can do here in Washington,” said Obama. “Meeting the new test of environmental stewardship means finding the best ideas at the grassroots level; it means helping states, communities and nonprofits protect their own resources; and it means figuring out how the federal government can be a better partner in those efforts.”

This is great news for land trusts across the country, including Solano Land Trust, which is celebrating its 25th anniversary this year. “The timing of this report is exceptional for Solano Land Trust,” says Executive Director Nicole Byrd. “As we celebrate our successes of the last 25 years and look forward to the future, I am thrilled that the president took our ideas into consideration, praised locally-driven conservation partnerships like ours, and endorsed the voluntary conservation incentives we need to continue our work.”

“This initiative will significantly reorient federal conservation efforts to emphasize working lands and embrace local governments and land trusts as effective partners in conserving the places that give meaning to our lives,” said Rand Wentworth, president of the Land Trust Alliance, which represents 1,700 community-based land trusts nationwide.

The report’s vision statement describes a future in which Americans participate in the shared responsibility to protect and care for our unique natural and cultural heritage for the use and enjoyment of future generations, and our working farms and ranches are conserved and restored through local partnerships.

“This vision ties directly into our goals at Solano Land Trust,” says Byrd, “and we are pleased that the president has stepped up to pledge his help in meeting them.”

The president’s 2012 budget request makes a down payment on these proposals by providing $200 million for the Farm and Ranch Lands Protection Program (FRPP) and $900 million for the LWCF, some of which “will be competitively awarded to address priorities and leverage resources for urban parks and public-private conservation projects.” In 2009, FRPP contributed $1.33 million to the purchase of the 489-acre Miles/Kidwell Easement between Dixon and Davis and Solano Land Trust is expecting $1.27 million from FRPP to help fund the 600-acre St. Anthony’s conservation easement near Putah Creek, which is scheduled to close this spring.

With the help of more than 100,000 volunteers and two million members, land trusts have conserved more than 37 million acres, including more than 12 million acres protected by voluntary conservation agreements with private landowners. Locally, Solano Land Trust has preserved over 20,000 acres since its inception in 1986.