West Sonoma Coast Vintners is an association of wineries and growers who are passionate about farming wine grapes on the coastline of Sonoma County. They advocate wines with a clear identity that evoke the complexity of the region and the authenticity of its community -- wines with balance, integrity, character and nuance.

Just as an aside, for many years, there has been a bit of a kerfluffle in the local wine industry over what is “the true” Sonoma Coast. Officially, the sub appellation goes as far east as the far side of Petaluma in what many think should be re-classified as the Petaluma Wind Gap, but not be considered Sonoma Coast.

By contrast, the “true” Sonoma Coast, it is maintained, should be limited to a small number of miles from the ocean—to vineyards located in places like Bodega, Occidental, Freestone, Annapolis, etc. It certainly is beyond debate that the weather in these areas is very different from that east of downtown Petaluma.
Occidental Center for the Arts
Donkey Barn Reunion Show
Years ago, a group of artists used to meet in Elizabeth Ryder Sutton's donkey barn on Occidental Road, to draw, paint and work together. For six years, they became great friends, creating a large body of work, while they exchanged stories, philosophies, techniques, and generally encouraged each other at their weekly sessions. Now the Donkey Barn group, many of whom went on to fame and glory, are getting together again for a show at the Occidental Center for the Arts.
The public is invited to join the party on Sunday, August 7 from 3p.m.  to 6p.m. The show will reveal what the Donkey Barn group has been up to since those days of yore. About 20 artists will show their work in the OCA Gallery at 4008 Bohemian Highway in Occidental, at the old Harmony School, now Harmony Village. The Grey Street Band will play in the auditorium next door to the gallery and there is sure to be dancing. 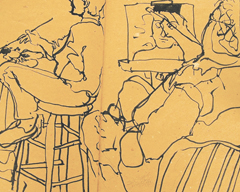