Doug Hastings is the epitome of my targeted artist – self-effacing, talented, passionate, unknown as an artist.  Ask any parent in the greater Forestville area about Doug Hastings, they will tell you what a great coach Doug is and has been for years.   First as a volunteer then as an El Molino girls’ soccer coach, Doug made a second career in coaching.  Today he is still coaching as he moves into his third career as sculptor and artist. 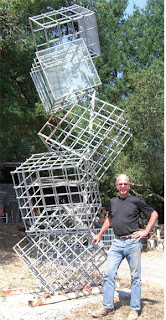 Doug can trace his roots back a few generations to places right down the road, with no plans to venture far from home.  The not-so-public side of Doug is that he has known since second grade that he was an artist.
Doug looked for a career that he would relate to his life as a whole.  His father was a heavy equipment operator and provided the inspiration that great statements could be made by moving earth and constructing things.  For many years he led and participated in a great construction company.  These were not small projects but lifting houses and changing the landscape.
The intrigue with structural form as an extension of art continues in Doug.  His fascination with Frank Gehry, the acclaimed architect merging building and art, and the Gehry designs that remain unbuilt, let us know that while Doug had retired from construction many years ago, he has not relinquished that part of his life.
In 1991 Doug concluded his construction career and focused his efforts on raising his two children.  It was not long before he was coaching soccer. He was the El Molino girls’ soccer coach for 13 years before becoming assistant coach to the San Jose State University Women’s Soccer team.  Back in Sonoma County and still coaching, Doug successfully led the efforts to build an all-weather track at El Molino to provide a safe environment for our youth and a wonderful walking and running surface for the greater community.
Doug produces a great deal of art in a variety of media.  But not addressing Doug’s background would leave a gap in the discussion of his art.   Driving to Doug’s studio/home, I recognized the realm of a sculptor who likes big installations and has welding apparatus nearby.  What I was not prepared to see were the stone carvings, bronze athletes and bold paintings that filled the interior spaces.  The breadth of work is as broad as the past professions and interests.  The first stone sculpture that grabbed my attention was an armless man with a face of determination.  Then my eyes went to the bold colors on canvas depicting bodies in motion.
What finally commanded my mind were the bronze figures of athletes that appear to be straining every muscle to hurl a discus, or reach that goal.  Doug uses a wax instead of the common Plasteline to form these figures, and works with the foundry to produce one-of-a-kind statues.  The breakdown of the wax during the heating process yields unpredictable texture that sets these figures aside from other athletic likenesses.  The vastness of Doug’s collection and his dedication to continuing his exploration are testament to his internal drive.  He is where he wants to be – painting, sculpting, collecting – coaching, gardening and living the good life of Sonoma County.
Doug is not yet on the open studios circuit but if you would like to see his creations, email him at dghastngs@earthlink.net for a private showing.   Be prepared to meet a great human being and see some terrific art.