Comedy for the Holidays in Kenwood Depot 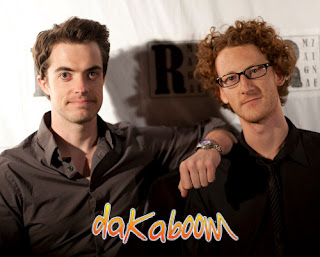 Edgy music-driven comedy duo Dakaboom is two guys doing comedy that combines the musical genres of pop, opera, hip-hop, jazz, musical theatre and a cappella. One is a curly redhead with Franki Valli's sinuses and a keen sense of humor. The other is a wide-eyed brunette ingénue with old-fashioned flair, a flawless voice and an occasional mermaid costume. They're long-time best friends who reference the old-school vaudeville style, while manipulating it into a playful, modern art form. And they’re coming home to Sonoma County.

UCI graduate McLain recently competed on NBC’s The Sing Off with his vocal group Sonos. Enjoying a break after three years of touring, Sonos is back home in LA to record their third album comprised of all original material. With a theatre degree from UCLA, Peglar’s music projects are a complement to his pursuit of acting. He played piano during the early days of Glee and is currently working on a Broadway-bound workshop featuring the musical catalog of Burt Bacharach. Back in October, Peglar led the band for Broadway Under The Stars, a benefit concert for Jack London State Park.

The boys of Dakaboom are no strangers to giving back to their community and supporting worthwhile causes. Earlier this month, Dakaboom was featured with Sally Struthers (among others)

in the Richmond/Ermet AIDS Foundation’s “Help Is On The Way” holiday benefit in San Francisco. In their high school days, McLain and Peglar’s quartet Total Chaos worked with Tommy and Marcy Smothers to raise money for the Valley of the Moon Children’s Foundation. “We’re grateful for all the opportunities we’ve had. We love what we do, that’s why we keep coming back,” says Peglar. The duo’s first ever performance was back on the Maria Carrillo stage in 2008 where they headlined a fundraiser for their alma mater’s Arts Department.

Lasting traditions are hard to come by, which is what makes this annual event so special. Family and friends return every year, often with more guests in tow. After filling both nights last year, Dakaboom has added a third performance to accommodate the demand. The regularity of these performances keeps the boys on their toes as they consistently work up new material to showcase for the hometown crowd. That, along with the release of their first album, promises this event to be a joyous celebration for the holidays.

Beginning January 2012, Dakaboom hits the road for their first extended tour, performing in Washington DC, New York City, Seattle, San Francisco and Los Angeles. More cities and dates to be announced soon. Follow them on Facebook and Twitter, and visit their website: www.thedakaboom.com for more information.