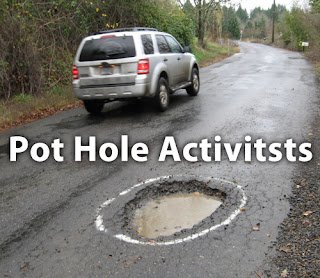 Save Our Sonoma Roads (SOS Roads) is a group of Sonoma County citizens that has formed to advocate fixing city and county roads. The goal of SOS Roads is to persuade elected officials to adequately fund the restoration of county roads and city streets. Roads are vital to public safety, property values and economic well-being.

The condition of our roads is directly correlated to insufficient funding for road maintenance and preservation. SOS Roads will educate individuals, groups and businesses on how our roads are funded and will advocate for appropriate allocation of public funds to roads.

Except for 219 miles of roads funded by federal and state funds, the supervisors have no plans to rebuild, repave or do anything but fill potholes on almost 1,163 miles (84 percent) of our county roads

Under current policies, the county Department of Transportation and Public Works says that the orphaned roads will deteriorate to a point where they can only be ground up into gravel. SOS Roads says Sonoma County residents deserve paved, not gravel roads.

Sonoma County ranks near the bottom of 58 California counties in the Pavement Condition Index (PCI), according to “California Statewide Roads & Streets Assessment” a 2010 report prepared by a consortium of cities, counties and other transportation agencies.

More than fifty percent of these roads have a PCI level that is considered a failed condition. Rebuilding these roads will cost 10 to 15 times more than preservation techniques according to the county “Road Ahead” report. (A copy of this report is available on the SOS Roads website: http://sosroads.org in the Road Reports and Budgets section.)

At about $1 million per mile, rebuilding these roads could cost over $1.1 billion, almost the total annual County of Sonoma budget covering all county government expenditures.  Unless budget priorities are changed, we can expect most roads to continue to worsen at an increasingly rapid rate. That is why it is so important to raise the priority of our roads now so this Herculean task can be accomplished over time.

SOSRoads.org has created a website that will help educate citizens and elected officials on the current conditions of our roads, existing road funding sources and what will happen if action isn’t taken. SOSRoads.org also plans to host a roads summit in spring 2012 bringing together citizens, road officials and elected representatives to talk about the crisis facing our roads and possible solutions.

For more information, contact SOS Roads Founders Craig Harrison at 573-9990 or email him at craig@sosroads.org; and Michael Troy at 793-8409 or email him at  troy@soroads.org.