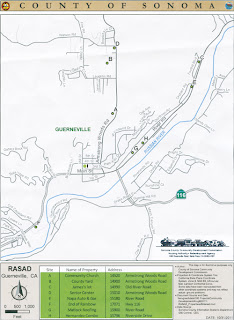 Charged with the tasks of recommending a workable site, an appropriate service delivery model, and “standards of (public) behavior”, the RASAD was created in July of 2010 by the Community Development Commission (CDC ) after Efren Carrillo and the County Administrator asked for a workable solution to homelessness along the lower river.   A diverse group itself, the RASAD has worked hard to overcome the cacophony of differing opinions while engaging the community in its deliberation process.

Called to order at 6:30 pm, 130 attendees were briefed on the Task Group’s findings to date and by 7:30 pm were working diligently around ten tables, each with a facilitator, to enumerate the pros and cons of eight potential sites.  As the evening wore on, the table groups would also offer up their opinions of which site they believed “best” and review the standards for behavior in an effort to be sure that community concerns would receive adequate weight in RASAD’s report and recommendations.

The optional locations included three along Armstrong Woods Road – the Community Church (A), the County Yard (B) and the Senior Center (D) ; three with River Road addresses – James’ lot (C) (14990 Old River Road), Napa Auto & Gas (E), and Matlock Roofing (G); the property at 15796 Riverside Dr dubbed the Hernandez Combo (H); and the End of the Rainbow (F)  nursery on Hwy 116 at the West end of town.   The tables’ pros and cons lists were similar but, with the exception of ruling out options along Armstrong Woods Road (primarily due to the proximity of the grammar school), their definition of a “best” site held little in common.

When yet another option was suggested – the site of the old Redwood Chapel (I) mortuary at 4th & Mill Streets - the room erupted in applause.

Significantly, the table groups discussed not only what would be most comfortable for housed community members but what would truly help those for whom the shelter will represent a “life line” to whatever next step their personal story requires.  Table debates included which sites could accommodate space for vocational training, a vegetable garden and parking of private vehicles.  Other quality of life issues included access to public transit, proximity to the liveliness of downtown Guerneville, and a solid dose of the peace and tranquility inherent to our natural surroundings.

While the discussions may have begun on a mechanical note (what would work or not work about each proposed site),  it quickly became clear that what was really under way here was a concerted effort to preserve – and further define – a town culture defined some years ago as “Hate Free”.

Whether staunch traditionalist or liberal, the people attending this meeting were there to ask the hard questions.  When does lending a hand cross over to enabling? How do we demonstrate that we want the best for those among us suffering a setback without becoming Easy Street for habitual free-loaders?

And, finally, as the discussion turned to concerns regarding “standards of behavior” for the homeless when they are in public areas and so not governed directly by the shelter’s House Rules, the controversy of a shelter program not restricted to participants who test “clean and sober” emerged.

The lively – but well-mannered - discussion ended when one attendee was invited to clarify her use of the term “Other-y” at her table.   If we hope to set the bar at respect and dignity, she explained, then posted rules demanding that shelter residents use the public restrooms defeat that purpose unless we also post that community members who happen to live in private homes may not defecate in public.

The room again erupted in applause and the attendees I could see seemed again proud to be a part of the process.

To close, Supervisor Carrillo and John Haig, the County’s Redevelopment Manager, thanked attendees and the Task Force for their work.  On November 15 the RASAD will meet privately to incorporate this last input into their report.  They expect to submit their Executive Summary and Recommendations to County Leadership prior to the county’s mandatory Holiday furlough.

The meeting ended with three announcements:
- The public restrooms are installed across the lot from the Sherriff’s station.  A ribbon cutting ceremony is to be announced for the Larry Weinstein Public Restroom.
- The Emergency Winter Shelter should open later this month.
- A new program for downtown businesses, Merchant Watch, kicks off 11/14 at 6 pm at the Oddfellows Hall.