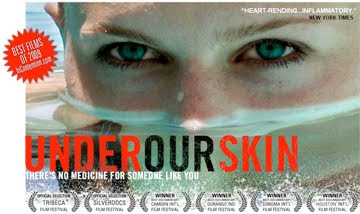 FILM ON LYME DISEASE
Sonoma County residents can celebrate Lyme Disease Awareness Month by attending Under Our Skin, a frightening exposé about how our corrupt medical system is failing to address one of the most serious epidemics of our time.

This film will also be part of Disability Awareness Week at Sonoma State University, Wednesday, May 5th from 7 to 9pm at 1801 East Cotati Avenue, Rohnert Park, Ives Hall - Warren Auditorium. http://sonoma.edu/dss/underourskin.shtml to RSVP your attendance, for more information and copy of the poster to circulate.

This eye-opening film investigates the untold story of Lyme disease, an emerging epidemic larger than AIDS. Each year thousands go undiagnosed or misdiagnosed, often told that their symptoms are “all in their head.” The film is being presented by the California Lyme Disease Association (CALDA).

According to CALDA volunteer Thora Graves of Sonoma, who organized the screening, the tiny ticks that cause Lyme disease are most active during the spring months.

“Many people think Lyme disease is rare or non-existent in California, but parts of California have tick infection rates that rival the worst of the Lyme hotspots back east,” says Graves.
Lyme disease is a bacterial infection spread by the bite of an infected tick. When it is misdiagnosed or goes untreated, it can cause long-term health problems, including crippling muscle and joint pain, disabling fatigue, mental illness, and even death.

“People seeking treatment are often mistakenly told they have MS, fibromyalgia, chronic fatigue or even mental illness—all of which can have the same symptoms as Lyme,” says Graves. Getting properly diagnosed is the first step, but doctors often rely on the ELISA test, which fails in 44 of every 100 cases, she adds.

“It’s important to use a sensitive screening test, which the ELISA is not,” Graves says.
Lyme is spread by western black-legged ticks, which have been found in 56 of California’s 58 counties. The tiny nymphal (immature) ticks can be found in leaf litter and on top of downed logs. Adult ticks are often found on the tips of grasses and shrubs next to trails. Ticks are carried from place to place by deer, squirrels, rodents, birds and even family pets.
For more information visit the CALDA website at www.LymeDisease.org.

HOW TO PREVENT LYME DISEASE
• Use sprays containing permethrin on clothing and DEET on skin.
• Avoid tick-infested areas and check yourself frequently for tiny ticks for several days following exposure. Parents should check their small children, paying particular attention to the hair.
• Remove any biting ticks promptly, using tweezers or a special tick-remover.
• Do not twist, squeeze or mutilate the tick. Try not to get any tick fluids on your bare skin.
• Disinfect the bite area and wash your hands.
• Save the tick in a small vial or plastic bag in case you want to test it.
• Watch the area for any signs of a developing rash.
• See a doctor knowledgeable about Lyme disease if you experience a rash or flu-like illness after exposure to ticks.