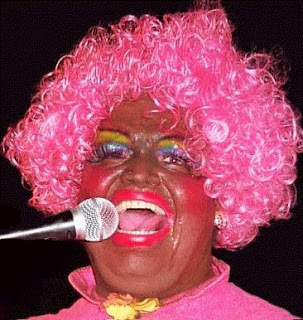 NOT Black
NOT Female
NOT Funny

Not long ago Don Imus-a controversial radio personality-referred to the Rutgers Women's Basketball team as “nappy-headed hoes”. Since the election of America's first Black President, many Americans believe-or want to believe-that we have reached a milestone in race relations. Well that depends on who you ask. When Black women continue to be portrayed as mammies, jezebels, inarticulate, or promiscuous hoes, then I know we still have work to do. Many racist and insensitive individuals continue to refer to Black women as welfare queens, nappy-headed hoes, and the like, but this time the perpetrator may surprise you.

Now there's Charles Knipp, a racist and culturally incompetent White gay male comedian donning a Black face and telling jokes at the expense of Black women and Black culture. Knipp's professional experience includes working as a nurse and a minister. He has dual American and Canadian citizenship. He is better known for his misrepresentation of Black women. He plays Shirley Q. Liquor in drag - a heavy-set, shoplifting, promiscuous, inarticulate, malt liquor drinking, and a single parent Black woman that doesn't know who the father of her 19 children are. Knipp has been touring the country for a number of years spewing his racist venom in venues that will accept him, oftentimes in White gay venues.

Knipp is now bringing his insensitive act to California to “allegedly” pay homage to Black women. His show is scheduled at the Russian River Resort-a White gay venue-in Guerneville located in Sonoma County where the majority of the followers are White gay men from San Francisco. Even more egregious, the theme of the show is called Hurricane Weekend and will be performed on June 19, 2010. June 19th or “Juneteenth”, is when Blacks from Texas and nationwide reflect and celebrate independence and freedom from American enslavement. I am outraged and can't believe the Sonoma County community would welcome such a performance, especially after the former Cotati City Councilman George Barich was recalled for appearing in blackface on his personal blog.

In 2009, several middle-age White gay men in San Francisco protested the performance of Buju Banton, a Jamaican artist, for his controversial anti-gay lyrics. The artist's 1992 song “Boom Bye Bye” where Banton sings of throwing acid in the face of a “batty boy” an equivalent to an effeminate man. The anti-gay artist caught the attention of San Francisco's "socially and politically conscious" community. Many leaders of the LGBTQ community and two San Francisco Supervisors met with the artist to address the matter. While some members of our LGBTQ community appear to be policing insensitive issues impacting the LGBTQ community, some continue to turn a blind eye to issues impacting non-White gay people.

I am a true fan of exercising our 1st Amendment Right and freedom of expression, but not when the action or speech is potentially divisive and damaging to others. I would expect to see the same outrage that went into boycotting and protesting the performance of a Jamaican artist directed at Shirley Q. Liquor who misrepresents and insults the humanity of Black women and Black culture. If there is to be peace and harmony across races in the LGBTQ community, then we must all eliminate malicious attacks on communities of color whenever they occur. Most importantly, I urge you all to join me and take a stand to eliminate racially insensitive performances-like Shirley Q. Liquor-that continue to cause great harm and place a wedge between the African American and LGBTQ communities. Feel free to contact me at