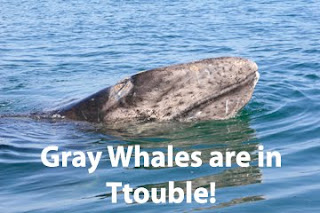 California Gray Whale Cows and Calfs
hit Disastrously Low Numbers.
A paper by Dr. Jorge Urban and others from the Universidad Autonoma de Baja California Sur, La Paz, Mexico details a serious decline in cow and calf numbers across all Baja Lagunas where Gray Whales give birth and raise their young. *

Dr. Urban has detailed the worst decline in l5 years. According to the paper, there is no explanation for the decline in terms of the status of the Baja Lagunas ( San Ignacio, Ojo de Liebre, Magadalena Bay).

CEO of the California Gray Whale Coalition, Sue Arnold, says that in face of this evidence, any quota set by the IWC Scientific Committee would be an act of gross environmental irresponsibility. “We’re hearing the same story up and down the west coast”, she says. “Declining numbers, very few cows and calves, and at least 10% of the population is emaciated”.

“Whilst it is clear that cow calf numbers hit a major decline in l999/2000 and in the 80’s, this decline is directly linked to the disappearing sea ice as a result of climate change. Whales are seeking food wherever they can find something to eat. As specialist feeders, with the longest migration on the face of the earth, these whales are up against almost impossible odds.”

Coalition National Director, Doug Thompson, describes the decline as “catastrophic” not only for the whales but for the economy of coastal cities which rely on whale watching up and down the west coast. “We’re hearing from expert scientists that the Gray Whales are suffering a major decline. The only group of scientists who appear unconcerned by this information is the National Marine and Fisheries Service(NMFS) who have a mandatory responsibility to protect this population. The public deserves an explanation as to why NMFS is ignoring all the indicators of major concern.”

The California Gray Whale Coalition calls upon the public and West Coast state and federal politicians to urgently contact the Deputy US IWC Commissioner, Douglas DeMaster at: