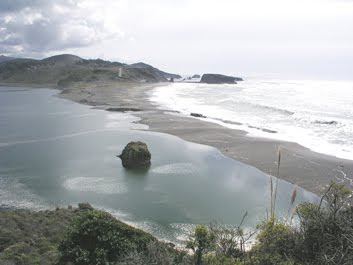 There is considerable buzz in the lower Russian River community about the effects of reducing the river’s summer flows. Will water quality be impacted? Will we have to drag our kayaks through the shallows? And what about the seals at Jenner; will new water level management plans drive them out? Are flow reductions really necessary, should the Jenner estuary become pond-like, and who is behind it?

For at least two decades, the degradation, restoration, and protection of the Russian River, its fisheries, water quality, and recreational resources have been hot topics in Sonoma County. Much has been accomplished to protect the river from the county’s human population growth and development. However, the river’s coho salmon population is now nearly extinct, and the river’s several steelhead populations are a mere, small remnant of what they were 50 years ago. With responsibility for promoting the protection and recovery of salmon and steelhead listed under the Federal Endangered Species Act (ESA), NOAA’s National Marine Fisheries Service (NMFS) has found several causes for these species declines, and it has identified steps that will likely promote their recovery. One of these steps involves restoring a more natural flow regime for the Russian River, while being careful to not unduly impact water quality and other resources.

Why Change Things?
To understand the importance of a natural summer flow regime, it is necessary to consider what is “natural”. The Mediterranean climate along California’s central and southern coast produces a predictable “drought” lasting 5 months or longer every year. In this area, stream flows naturally drop to very low levels by early fall.

Along our coast where rivers flow into the ocean, ocean wave action typically forms barrier beaches across river mouths, so that rivers become naturally cut off from the ocean. When separated from the ocean by a barrier beach, the most downstream segment of the river forms a freshwater or somewhat salty (brackish) lagoon that can provide extremely important rearing habitat for juvenile steelhead.

The water quality dynamics of these lagoons are complex and dependent on inflow, geology, and ocean processes. Sometimes it can take several weeks for high quality conditions to become established. Nevertheless, researchers have found that a disproportionately large number of returning adult steelhead are reared for extended periods in these “closed lagoons” compared to the survival and return of adults that were reared mainly in headwater tributaries.

The ocean survival of lagoon reared steelhead is higher because the juveniles are able to grow quicker and larger in the highly productive lagoon environment.

Homes along the estuary are threatened by water backing up at the barrier beach so the sand bar is mechanically breached with a deep cut to prevent flooding these homes. 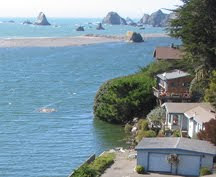 During the early years of Sonoma County, natural summer flow in the Russian River was relatively low (approximately 30 cfs during August and September). The mouth of the river at Jenner often closed during summer months. This is not surprising given how low tributary stream flows are during summer, even in undeveloped watersheds.
However, for the past 100 years the mainstem Russian River has had a remarkably different and artificial flow regime during summer months. Water supply and summer flows have progressively increased beginning with the construction of the Potter Valley Hydroelectric Project in 1909. With that project, Eel River flows are diverted to the upper Russian River. The construction of Lake Pillsbury (1921), Lake Mendocino (1959), and Lake Sonoma (1981) further and greatly increased water supply and summer flows in the Russian River.

This is great for boating, but it disrupts the natural formation of a lagoon between Jenner and Duncans Mills. Under natural lower inflows, the river would flow straight through the barrier beach (not over it). However, when flows are six times the natural flow, the water backs up behind the beach, threatens flooding, and thus requires someone to breach the beach.

The result is a tidal, unstable environment that is more salty, shallower than a more natural “ponded” system, and relatively poor quality habitat for rearing salmonids. The very high summer flows also degrade the quality of coldwater rearing habitat for steelhead between Ukiah and Cloverdale.

Nowhere else along the coast of California are rivers discharging highly elevated, artificial flows (over 100 cfs) to the ocean during summer with resulting impacts to listed species.


Through a Biological Opinion (BiOp) issued in September 2008, NMFS directed Sonoma County Water Agency (SCWA) to petition the SWRCB to reduce minimum stream flows in the Russian River from late spring through early fall. The exact minimum flow would be determined during an interim period of approximately seven years.

Water Agency staff seining during estuary studies of water quality and fish habitat
The BiOp states that a minimum flow of about 70 cfs at the Hacienda Bridge together with a 10 to 15 cfs operational buffer flow would result in an 80 to 85 cfs flow that may achieve multiple objectives of protecting lagoon habitat near Jenner, while retaining boating flows in the lower river and avoiding significant water quality impacts.

A 10 to 15 cfs operational buffer is needed by SCWA in order to ensure compliance with any minimum flow standard. Thus with a 70 cfs minimum flow, flows would generally be in the vicinity of about 80 to 85 cfs.

The BiOp states that during the approximately seven year interim period, SCWA should seek temporary changes in minimum flows so that water quality, boating and other potential effects of a 70 cfs minimum flow and alternatives can be adequately assessed. After this period of study and assessment, with input from the public and involved agencies such as SCWA, Department of Fish & Game, and NMFS, the SWRCB will be able to determine the best minimum flow for the Russian River and its resources, and then make a permanent change to D-1610. This will be a long process, with substantial environmental assessment and opportunities for public comment.

Concerns about Flow and Estuary Changes
Concern by some members of the public about reduced summer flows and new approaches to managing water levels in the river’s estuary generally fall into three areas: impacts to water quality, boating, and the harbor seals at Jenner.

Unease about water quality impacts is due to the simple fact that pollutants can become concentrated at lower flows. Contaminants (e.g., pesticides and pharmaceuticals), excessive nutrients that promote algae growth, and pathogens (e.g., fecal coliform) are in the river. Urban waste treatment facilities along the Russian River do not discharge to the river between mid-May and October 1.

Flushing pollution to the ocean with highly elevated, artificial flows is causing harm to listed salmonids and is contrary to rational water management policy. Dilution is not the solution to pollution, especially in a Mediterranean climate.

River kayaking and canoeing are usually swift water recreation activities. In general, the quality of a river boating experience increases with flow—up to a point. However, high artificial flows that facilitate a high quality, summer boating experience can come with a high ecological and societal cost. Yet, summer boating in the Russian River can likely be preserved by identifying a flow that minimizes the need for boaters to drag their boats through shallow riffles.

Preliminary evaluations suggest that a flow in the range of 75 to 90 cfs at Hacienda Bridge creates such conditions, and that this is probably within the range of flows needed to create a closed lagoon at Jenner. Note that 75 to 90 cfs is still roughly three times higher than pre-dam summer flows for the lower Russian River. NMFS BiOp anticipated the need for additional evaluation of boating flows and flows needed to create a closed lagoon. That evaluation will be occurring during the approximately seven years prior to the change in D-1610.

Concerns about new water level management practices in the estuary on seals include apprehension that heavy equipment will frighten or even run over animals, and fears that with a closed lagoon, seals will be displaced from the mouth of the river where hundreds of animals congregate during various times of the year.

SCWA has been operating heavy machinery for many years on the beach at Jenner without significant adverse effects on harbor seals. The new management plan simply calls for making a shallower and longer “slot” at an angle to the ocean.

Harbor Seals live at the mouth of the Russian River where food is plentiful. Flow from the river to the sea follows a natural path until the barrier beach is formed. The Biological Opinion requires creating an overflow channel similar to the natural path - as opposed to the straight deep cute - to allow river water to flow into the ocean but no ocean water to flow back into the lagoon.

NMFS is charged with protecting both harbor seals under the Marine Mammal Protection Act (MMPA) and salmon listed under the ESA. NMFS issued an Incidental Harassment Authorization under the MMPA to SCWA and through the permit process, NMFS marine mammal specialists identified limits for beach management actions and required monitoring in order to protect seals.

NMFS also requires SCWA to conduct extensive long-term monitoring of estuarine water quality and biological productivity. Changes in estuarine water level management must be done in a manner that ensures the harbor seal population will remain stable and healthy, while reducing impacts to listed salmonids.