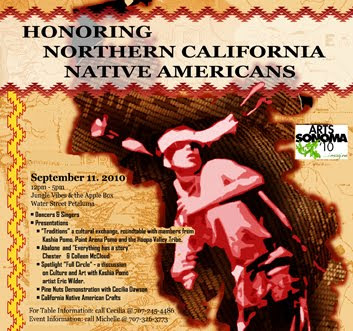 By Connie Madden
Many of us have impressions of Indian tribes from the movies, from TV, from stories read to us as children. But it is rare that non-Indians can share a dialogue or learn skills from our Native American neighbors, who live among us, though often in villages far from towns, such as the Kashia Reservation near Sea Ranch in northwest Sonoma County and rarely available for a conversation in our cities.

“It’s as important for young Native Americans to know their own history and be proud of that as it is for everyone,” says former Kashia Pomo Tribal Chair, Eric Wilder, a graphic artist and animation and video game designer. “I do my art to reach children, give them a firm rock to stand on.”

On Saturday, September 11 from noon till 5pm along the Petaluma River, Eric will join with Native Americans from three regional tribes to share their wisdom, teach crafts and offer music, dance, and tables of native arts at the first annual Honoring Northern California Native Americans, a part of Sonoma Arts Council’s summer program.

Presentations include Traditions, a cultural exchange roundtable with members from Kashia Pomo, Point Arena Pomo and the Hoopa Valley Tribe; Spotlight Full Circle – a discussion on Culture and Art, with Eric Wilder, and craft workshops including Pine Nuts with Cecelia Dawson. Crafters will set up along the Petaluma River on Water Street, at the Apple Box featuring craft tables and workshops and the joint backyard of Jungle Vibes and Lalas Creamery will offer conversations and presentations from Native American Elders and singing and dance performances of young Indians.

There will be tribes coming from all over to sell their arts and crafts and jewelry,” according to organizers, Eric Wilder, Michelle Baynes. The program is part of Sonoma Arts Council’s 2010 program and all proceeds will go to the artists.