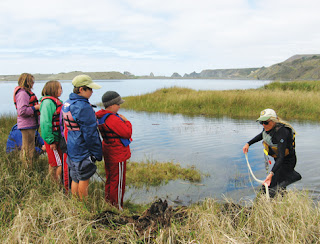 Lucky Kids Learn
River Estuary Science
with Penny Island Native
By Sarah Amador
“It’s like a scene from a movie,” Kobi Calhoun said, dipping her kayak paddle in the waters of the Russian River Estuary.

Kobi and Christina, 6th graders from St. Paul’s Episcopal School in Oakland, were not the only ones making new discoveries in Jenner’s Estuary last month. Nearly 200 students were educated in October through WaterTreks EcoTours, a kayak company based in Jenner. Naturalist Suki Waters and her team of environmental educators guided students through the estuary to Penny Island to the Pacific Ocean, using the environment as a living classroom. 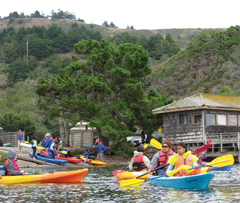 For many students, it was their first time on kayaks. When 7th graders from Willowside Charter School visited, their teacher Debbie Grima-Lowe loaded kayaks with field boxes, clipboards, and waterproof science observation worksheets. Following her lesson plans, students identified and drew pictures of plants, vertebrates, and invertebrates. They learned about water quality, salinity, biotic and abiotic factors.

“It’s been wonderful,” said Christina’s mother, Xina Loveall. “All the senses are engaged. And to have a guide like Suki, added bonus! There’s history.” Waters has a unique, personal connection to the land. Her ancestors were part of a Native American tribe that made Penny Island and Jenner their home.

“My grandmother was born there,” Waters said, pointing to the beach directly across from the island. Raised by her grandmother, Waters helped take care of Penny Island, its gardens, and its cows.

Grima-Lowe has brought more than three hundred students to WaterTreks. “It’s important for me to give students memorable, new experiences, in and out of the classroom,” Grima-Lowe said. “It’s these experiences that give them a foundation to learn from. I try to teach them science is about discovery and connections. Connections to the natural and cultural environment, of which they are a part.”

In the eco-tour offered by WaterTreks, the environment and wildlife were protected because no gas was used. Kayaking is a zero emission form of transportation. Students collected trash, such as a tennis shoe turned by nature into a silverweed planter. At the estuary’s Visitor Center, students examined a boat made from trash and learned how plastic kills animals.

On one trip, Susan Porter, 6th grade math and science teacher from St. Paul’s, brought plaster for track castings. On the beach where Waters’ grandmother was born, students found tracks. They prepared the plaster and poured it.

Darious Wetworth, a St. Paul’s 6th grader, explained why he liked living classrooms. “This is the real track. You can see if it was made by a deer or raccoon. It’s not just a picture in a book.”

Affiliated with EcoRing, Stewards of the Coast & Redwoods, American Outdoors Association, and other nonprofits, WaterTreks is in process of becoming a nonprofit organization.
Sarah Amador is a freelance writer and can be reached at: www.sarahamador.com