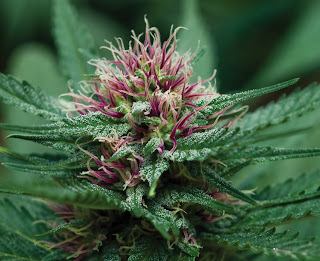 Personal Perspective on Prop 19
from Miles Mendenhall
This may not be of interest to everyone, but a lot of last minute confusion has started over Prop. 19 because the long simmering differences (starting way before Prop. 215 was ever on the ballot) are starting to surface right before this election. In case you haven’t followed the many twists and turns there have always been turf battles within the movement, just like every other movement for change and many folks didn’t want Richard Lee to put this on the ballot this year, wanting to wait until 2012 when they reasoned there would be more interest.

There is also the issue of new people jumping on board the profit making ship once Prop 215 passed back in 1996 and the folks making money now are threatened that the price will fall. These opportunists were never involved back in the day pre—Prop 215, when most of were working to get pot decriminalized for the issue of civil liberties. I could go on and on, but needless to say all this has been emerging locally on WACCO and people are very confused. The short ten points below were written by our own Miles Mendenhall. Please read if you haven’t made up your mind. Yes on 19!! Mary Moore


OK, since no one else has bitten the bullet, here goes:

1. Proposition 19 isn't really legalization. It only allows possession of up to one ounce of cannabis. Under current California law, an ounce or less of pot is a simple civil infraction you CANT be arrested, you DON'T go to court, and you WONT get a criminal record. Prop 19 doesn't make any improvements to decriminalization or prop 215. True 19 isn't total repeal of prohibition. But it's a big step in that direction. As for the new civil infraction, you can be fined, it will go on your record. As things are possession of less than an ounce is still against the law. If 19 passes, it will be legal. That's a significant difference, no matter how much anyone tries to downplay it. And by not even ticketing people for possession of less than an ounce, big bucks in taxpayer funds will be saved.

2. Prop 19 creates several new cannabis related crimes with extremely severe penalties. Don't pass a joint to a 17 year old, you will be looking at a max of 7 years in state prison, seriously. It's already illegal to give drugs or alcohol to minors. This is nothing new. How many people have you read about in the paper who have been sent to prison for doing so? This charge is bogus. I didn't participate in the crafting of Prop. 19, but my best guess is that the sanctions against providing pot to minors, was included to make the initiative salable to the tough on crime, drugs are bad, they're poisoning our youth crowd. A necessary compromise to give it a shot at passing. Keep in mind that the proposition was written by activists and lawyers who have been fighting this fight for a very long time. They've done the polling to determine what has a chance of passing, and what doesn't. I'm not a criminal lawyer, or a cop, so if anyone wants to compare current laws and penalties for "contributing to the delinquency of a minor" with the specific sanctions in Prop. 19 against providing weed to kids, I'd be very interested.

3. Prop 19 is solely designed to allow large scale cannabis production by politically connected corporations. Oakland has already started the process to license a Prop 19 Cartel mega-grow. Yes a big Medical Marijuana grower has donated major funds to the Yes on Prop. 19 campaign, and is one of the architects of the effort. So what? My reading of the proposition says that every adult can grow a 5'x5' plot. How does that help an industrial grower of "medicine"? Sounds like baseless slander to me. "... solely designed ..." Yeah, right. Prove it! More scary language, without substantiation.

4. Most legal experts agree that Prop 19 is poorly written and will leave police and judges to enforce it at their discretion. For example, consuming cannabis would be illegal in the same "space" as a minor. Police and judges are free to interpret the word "space" to mean the same room, house, or entire apartment complex. Who are these "most legal experts"? On the website for this list, there are opinions from two lawyers. I'm not a lawyer, I'm not qualified to evaluate their arguments. Prop. 19 was written with the help of lawyers. Lawyers support it. Who did the poll of every legal expert in the state, the nation, to determine what percentage oppose it, what percentage support it and how many don't give a toss? This is more propaganda language unsupported by facts.

5. There is no need to rush into a law that will be difficult to change. There are better full legalization laws, including one set to be on the ballot in 2012. How long do we have to wait? Prop. 19 is before the voters. If there's a need for additional propositions, or changes in the law, great, we'll deal with them when they're before us to decide. This argument is completely specious. Don't let the perfect be the enemy of the good.

6. Prop 19 will lead to the walmartization of the cannabis industry. And unfortunately, this will result in lower quality and fixed prices. Limited competition and government control will allow large scale growers to determine prices and dictate quality standards (or lack thereof).  Nobody can predict what will happen in a legal pot market. Or the underground one that is likely to continue. If trends in boutique consumer markets are any evidence, it's likely that quality will be emphasized, over quantity. Look at wine, coffee, chocolate, pastries. Does anyone see the big producers forcing the small ones out of the market?

7. Local governments will control the taxation, production, and distribution of cannabis. This is a touchy political issue; most local politicians wont risk a backlash by allowing dispensaries in their city. This means many people will have to travel long distances or break the law to purchase cannabis. Local control!!! Isn't that what all the Tea Partiers, States Righters, Shop Local, etc., etc. call for all the time? Is anyone having to drive long distances now to get their weed? Do you think the people who make a little, or a lot, of scratch off of weed sales, whether regulated and legal, or not, are going to let some market demand go unexploited? This is total "baffle them with bullshit." No basis in fact, of any predictable kind, whatsoever.

8. Prop 19 will likely supersede prop 215, adversely affecting medical cannabis users by dictating grow size, possession amount, patient to patient sales, and location of use. That's not what the language of the proposition says. It says that 215 takes precedence and should not be changed in any way. In spite of the abstruse argument by one lawyer on the No on 19 website, claiming this (again, I'm not in a position to analyze her assertions) the clear clause in Prop. 19 says 215 stays without revision. Separate issue. Apples and Oranges. This slam is a lie. Find a "majority of legal experts" to back her up, I might consider rescinding that claim. Without such proof, I'll stick with my refutation.

9. Unbiased cannabis activists do NOT support Prop 19. This includes the late Jack Herer and the co-author of prop 215, Dennis Peron. Some leaders in the Medical Marijuana movement/industry oppose Prop. 19. I am not privy to all of the inside politics. I do know that getting a bunch of activists to agree on anything as a seamless whole is not just herding cats. It's herding psychotic schizophrenic cats on Meth! I surmise that the resistance in the Medical Pot scene has a lot to do with the fear that prices will plummet, and a legal market for pot will undercut their profits. Follow the money. The truth will out. Also I imagine that anyone who has spent decades distinguishing between medical and recreational uses for pot, and has been dedicated to arguing for the medical need, might be invested in keeping a clear division between the two. And oh, I guess any cannabis activist who supports Prop. 19 has to be biased! Right? That's the logical conclusion from the first sentence quoted above. Q.E.D.

10. The federal government has decided to not prosecute medical cannabis users. This will not be the case if Prop 19 passes. Many people believe that the passage of Prop 19 will bring an aggressive response from the feds, perhaps putting medical users at risk of losing access to medicine. Repetition with more baseless assertion. A lie repeated often enough, becomes the truth. Unless people pay close attention and keep refuting the lie. Holder said he'd come after a legal pot market in California if 19 passes. We'll see. The Feds did bust clinics early on. People went down for that. Then other states passed Medical Marijuana laws. We had a global financial crisis in which governments funds are mighty scarce nowadays. We'll see.

"This will not be the case..." And you know this because? Bold assertion is not proof of anything. Even though it's good rhetoric. Holder was blowing smoke. Time will tell. Otherwise there's nothing to back this claim up.

"...perhaps putting medical users at risk of losing access..." Lot's of wiggle room in that "perhaps". But it's pure unfounded speculation.Divide and conquer. If recreational users get a break, the sick will suffer!!!! Uh huh. We know this because? .... The fact is nobody knows this. It's just alarmist rhetoric to undercut support for this incremental step towards legalization. Straight up fearmongering.

The Drug Policy Alliance supports Prop. 19. If you don't know who they are, you should. They're the lead national organization opposing the Drug War with facts, reason and political organizing. They are the main architects of a reformed national drug policy based on harm reduction and decriminalization. (Note I didn't write legalization. It's an interesting debate, read up on it.) If Ethan Nadelmann supports Prop. 19, that means the, "majority of drug law reform experts" support it. If you're on Facebook, I recommend the thread Lazara Allen's thread with Laura Hamburg for additional discussion and factual recitation. Prop. 19 won't completely rescind all drug laws regarding marijuana. Everybody who thinks that possibility is on the agenda of political possibility in the near future, raise their hand.  Hey, we have a majority of experts who agree!!!

On the other hand everybody can look at polls, lists of supporters, lists of donors and statements of support, and make up their own mind. Just don't let anybody use scare quotes and empty speculation to influence your thinking. Unless you like being a dupe.