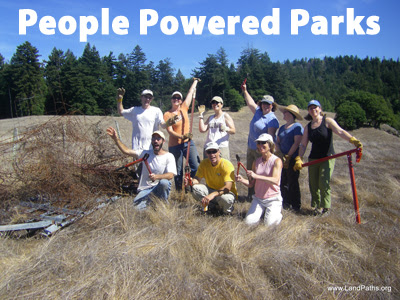 A Cure for the Closed Park Blues
By Craig Anderson
In what has become something of an annual tradition, State Parks’ recently announced another round of “service reductions”. With this announcement comes the closure of many trailheads, beach access points, and campgrounds.

We are reminded of last year’s threats from Sacramento that Annadel and other local gems would be shuttered. With public funds increasing scarce, it is clear that we need another solution to keep our local parks open and cared for. To combat the ‘closed park blues’, we need ‘People Power.’ 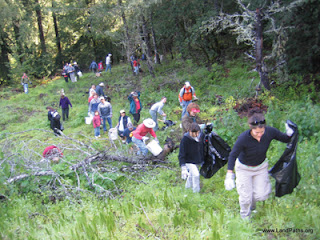 On a recent weekend at a 30-acre park of ancient redwoods near Occidental, “people power” was in action. Despite the steady rain, 40 neighbors and other park users from as far away as Santa Rosa and Cazadero gathered to steward this ridgetop forest. By maintaining trails and clearing fuel loads to reduce fire risk, these Friends of the Grove took action to keep the Grove of Old Trees open to the public – and strengthened community connections in the process.

With volunteer help like this, LandPaths, a Sonoma County non-profit, has been providing a new way of “opening” open space and parks since 1997. Today, with the recent defeat of Proposition 21 (the State Parks budget initiative) and with public budgets continuing on a downward spiral, the need for ‘people power’ has never been greater. Through this model, over 5,400 acres of local state, county, and city land that would otherwise be closed to the public is instead open and cared for.

“The enthusiasm for this model is fantastic,” said Caryl Hart, the new Sonoma County Regional Parks Director, while attending a recent Taylor Mountain permit orientation along with 100 other hikers, bikers and horseback riders. “It’s going to have tremendous influence on the future of how we open new parks.” 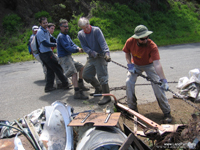 With People Powered Parks, LandPaths provides public agencies and private landowners not only with volunteers to reduce management costs, but also with the professional oversight and insurance to reduce liability costs. “In my estimation it’s the cheapest date in government; they’re running parks for pennies on the dollar,” says Rick Ryan, Jenner resident, businessman and Willow Creek Park permit holder.

This “cheap date” is quickly garnering attention around the region and state. “We are looking at the public adoption of open space work that LandPaths is pioneering as a model for to help shape the future direction of land trusts statewide” says Bill Leahy, co-chair of the California Council of Land Trusts.

Most of us would like nothing more than to see our park agency budgets restored to functional levels and will continue to work toward that goal. In the meantime, however, we can keep the ‘closed park blues’ at bay with a strong dose of ‘People Power.’

Craig Anderson has been the executive director of LandPaths since 1997. Established in 1996, the organization’s mission is to “Foster a Love of the Land.” LandPaths is powered by hundreds of volunteers and 11 staff from offices at 618 Fourth St, Santa Rosa, CA 95404 (707)544-7284. Additional information and schedules of orientation sessions at all four People Powered Parks are available at http://www.landpaths.org/.