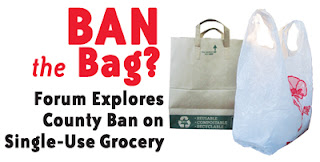 By Mary Munat,
ReduceSingleUse.org
A free public forum investigating single-use bags in Sonoma County – paper as well as plastic - was held on February 2 at the Santa Rosa City Hall. Sponsored by North Bay Corporation, and organized by Sonoma County-based ReduceSingleUse.org, the forum drew over 100 people, including several elected representatives.

A worldwide movement away from the plastic carriers was outlined by Keynote Speaker Carol Misseldine of Green Cities California, who presented economic, social and environmental supporting evidence from around the country and beyond.

The retailer’s view is that any ordinance needs to impact all stores evenly, not merely the larger grocery stores, as explained by Safeway’s Susan Houghton, Northern California Director of Public and Governmental Affairs.

Paper Bags, too
While the general focus of bans around the country and the world has been plastic bags, paper bags featured largely in this discussion as equally environmentally harmful. Since they don’t stand out in such blowing, snagging, clogging contrast on our roadsides and in our waterways, they land slightly behind plastic in emphasis. The need to include a fee on paper bags in any proposed ordinance to reimburse stores for increased costs and to encourage shoppers to shift to reusable bags was mentioned by all of the six participating panelists.

This year alone, four U.S. cities have adopted such bans, with Marin County passing their own on January 25 despite a threat from the American Chemistry Council (ACC), representing the plastic bag industry. Marin Supervisor Charles McGlashan, at the February 2 forum, said, “Bring it on,” as his board challenged the threat and voted in favor of the ordinance. Some cities and counties, like Los Angeles and San Jose, have prepared Environmental Impact Reports in advance of adopting bag bans, in order to avoid action from the aggressively litigious ACC. The Marin Board of Supervisors, however, proceeded with a “Categorical Exemption,” maintaining that a ban on plastic bags can do nothing but good for the environment and spending upwards of $200,000 on an EIR to prove it is not necessary.

Waste Agency Considers Ban
The Sonoma County Waste Management Agency has been considering a ban for two years. Patrick Carter, a waste management specialist with the agency, presented evidence of the need to draft such an ordinance, and the agency has just sent letters out to over 400 grocery stores in the county informing them of this possible, even likely, mandate.

San Francisco’s Kevin Drew, Zero Waste Coordinator of the city’s Department of the Environment, shared San Francisco’s experience with a ban on plastic bags. The resultant increase in paper bag usage cost Safeway alone over $1,000,000 last year, according to Susan Houghton, providing further encouragement to move rapidly away from all single-use bags.

Panelist Robert Bateman, President of Roplast Industries, a plastic bag manufacturing company, was also in favor of movement away from single-use bags but maintained that plastic bags intended for multiple-use are a viable alternative.

Help reducing litter and waste
Next steps for pro-active individual shift, including news for how to live life with far less plastics, were offered by Mary Munat. Chair of ReduceSingleuse.org, a newly formed all-volunteer organization, she also presented proposals to help our decision-makers move forward. A strategy committee currently seeks an influx of ideas and energy, she said, and they are preparing a two-pronged approach, trusting that Plan A – in which the SCWMA drafts a bag ordinance encompassing the whole county - will be successful. Plan B would be a city-by-city, citizen-led initiative drive and far too slow in the face of current environmental impacts of plastic litter.

Students from Sebastopol and Ukiah attended, with the latter reporting their participation in and support of Mendocino County’s blossoming bag ban campaign. The forum, with further sponsorship by Global Materials Recovery Services, Sonoma Compost, Mike McGuire, Taylor Maid Farm Coffee, Oliver’s Market and WaccoBB.net, will be rebroadcast, thanks to the Community Media Center. Further information available at www.reducesingleuse.org includes relevant news about bag bans and the thriving trends of reuse and increased environmental responsibility.

Mary Munat, owner of Green Mary, makes her living doing event waste diversion at public events around the San Francisco Bay Area, with a strong focus on waste prevention and eco-education. She works with Green Sangha’s Rethinking Plastics Campaign to reduce plastics consumption across the board, and thrives on collaboration on all matters pertaining to environmental accountability. She and other RPC and ReduceSingleUse.org members are available for presentation. Contact her at: www.green-mary.com