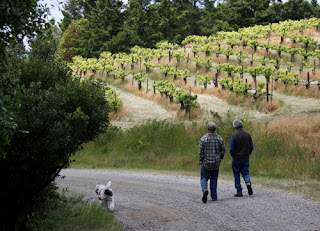 Before I repeat this story, I'd like to inject a few thoughts of my own. Personally, I'm concerned about land succumbing to vineyards. Monocultures are dangerous. All it takes to destroy acre upon acre of vines is a rampant insect or disease. Nature creates tremendous variety as part of its system for survival. By covering our hills with vines, we weaken the system and become vulnerable. This agricultural risk is for a plant that does not produce food. How much wine do we need to drink? Our local economy has become dependent upon this product - and therefor vulnerable. When that product suffers, we all suffer. In the case of Annapolis, healthy forests are being replaced by more vines that we simply don't need. There's something terribly wrong about this and I am grateful for people standing up to oppose this. The Gazette ran a story on this conversion back in September 2009. Two years later the battle continues.... - Vesta

But in the village of Annapolis in Sonoma County's coastal mountains, a quiet battle is pitting trees against vineyards. Here, where many homes are found off dirt roads that snake through dense foliage that has regrown after the clear-cut logging of a half-century ago, the usually mellow residents are riled up over plans to raze hundreds of acres of redwoods and firs to make room for grapes.

At issue are two proposed "timberland-to-vineyard" conversion projects, the first such applications that California Department of Forestry and Fire Protection, or CalFire, officials can remember in which large areas of redwoods and firs would be removed for vineyards.

Even with a three-year drop in the price of high-end wines like those grown in Sonoma County, and a glut of wine grape production on the more than 62,000 acres of vineyard already planted in the valley below Annapolis, two large wine companies want to remove nearly 2,000 acres of trees.

The companies say they simply want to make great wines. Opponents argue the projects are unnecessary in a county already producing more pinot and other grapes than the market can bear, and that the vineyards will hurt endangered fish struggling to rebound in the Gualala River by siphoning off water and introducing pesticides. At least one of the proposed sites contains sacred tribal artifacts.

Annapolis residents say the county has enough wine grapes, and that the tribal artifacts and environmental concerns are being thrust upon the community because just so two large winemakers can grow "vanity vineyards" that yield small amounts of expensive wines.

"The watershed's on its heels as far as fish goes, which is why it's important to keep the flow. If you put all these straws in the watershed drawing water out, you might as well kiss it goodbye," said Chris Poehlmann, a museum exhibit designer who lives in Annapolis and heads a local conservation group.

The grape growers argue these lands will be developed one way or another as the county grows, and that it is better to have vineyards than housing developments.

Napa's Artesa Vineyards, owned by a Barcelona, Spain-based wine heavyweight Grupo Cordoniu known for making sparkling wine, wants to develop 151 acres of pinot noir and chardonnay vineyard on a site containing artifacts from ancient Kashaya Pomo villages. Premier Pacific Vineyards is seeking to put rows of grapes on about 1,800 acres of 20,000 it owns nearby in a project that will also include residential housing called "Preservation Ranch."

Decisions on both projects are expected by county and state officials within the next year or two.

Both winemakers argue the projects are undergoing detailed environmental review, and that in some cases the developments will help, not hurt, the environment by providing better management of the land and repairing decades-old damage by logging companies.

But over the past half-century the once-logged area has seen regrowth, and now is host to a dense tangle of 50-to-60-year-old tanoaks, redwoods, Douglas firs and Manzanita bushes. The vineyard sites surround the Gualala River watershed, which is host to endangered coho and threatened steelhead. Both winemakers will have to prove their projects will not hurt the recovery of these federally protected fish.

The Artesa project, which is closer to a permit decision by CalFire than Preservation Ranch, would clear 151 acres next to two existing small vineyards. The acreage was scaled down from 171 after the company discovered that the site was home to archaeological resources from a former Kashaya band of Pomo Indians village. The tribe also opposes the project.

The interest by winemakers in converting timberland also spurred Sonoma County to pass their own regulations in 2006, a job previously governed solely by state forestry officials. The county has yet to approve a single large project, but has issued 31 approvals for minor conversions of three acres or less each, said Pete Parkinson, Sonoma County's director of permits and resource management.

"Our objective is to provide an extremely thorough review of the potential environmental impacts that could arise," he said. "We're looking at everything, from the impact on timber resources to watershed concerns."

While it may sound counter-intuitive, Premier Pacific argues that the project would end up improving, not hurting, the environment.

In documents filed for the project, the company said it would repair old logging roads that currently send sediment into the Gualala River. Removal of this sediment would improve water quality and fish habitat, it argues.

But the Preservation Ranch project goes beyond just the creation of new vineyards: It would also allow what it calls "sustainable timber management" 18,000 acres, meaning the cutting and sale of trees.

"The premise that the vineyards serve as the economic engine for restoration is pure marketing and production forestry, with no a trace of scientific analysis to support it," said Peter Baye, a former U.S. Fish and Wildlife Service biologists who lives in the area and opposes the projects. "Natural ecological succession is cleaning up the old damage by loggers very nicely, thanks. The vast majority of the land wasn't damaged beyond self-repair at all."

Baye and the projects' opponents question the motive for taking such extreme measures to make vineyards when the market for high-end wines has seen years of contraction during the recession. In Sonoma County, the grape crush fell 10.7 percent in 2010, leaving growers with too many, driving down prices.

But the allure of high-caliber pinot noir continues inspiring vintners to find land here that can produce it, even at a very high cost. And both wine companies have deep pockets and the desire to create excellent wines.

In the end, it's the long-term environmental costs that concern the Annapolis residents, who claim the lasting damage will not create profits for these companies, only the vanity vineyards they want to make high-end wines.

"All of those who are concerned about the future of Sonoma County need to ask how we are allowing the destruction of redwood forests and Native American heritage to emerge as 'business as usual,'" said Peter Schmidt, an anthropology and archaeology professor at the University of Florida who hails from the area, in an essay.