August . . . is the eighth month of the year in the Julian and Gregorian Calendars and one of seven months with a length of 31 days. This month was originally named Sextilis in Latin, because it was the sixth month in the original ten-month Roman calendar under Romulus in 753 BC, when March was the first month of the year.

About 700 BC King Numa Pompilius added January and February before March and it became the eighth month. Julius Caesar added two days when he created the Julian calendar in 45 BC giving it its modern length of 31 days. In 8 BC it was renamed in honor of Augustus, who did not take a day from February! (February could hardly afford to give up any more days).

He chose this month to take his name rather than his birth month - which was traditional - as a mark of honor to the defeated Queen Cleopatra the last ruler of Egypt, this being her birth month. 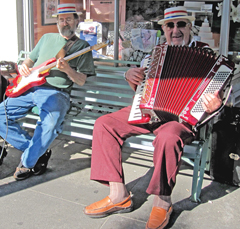 The dog days of summer are so named because the Greeks thought that Sirius, the dog star, in close proximity to the sun, was responsible for the hot sultry weather. Now the Greeks are in the economic abyss somewhat akin to the dog days! So what to do eh?

The intransigence of summer loosed upon the unsuspecting students underwhelmed the nature of the adventure as set forth in the book of DAZE! Each day in fact had an underlying purpose and to discover the meaning of one in the first degree was to open Pandora’s box on the successive meanings of the days that ensued!

If you are now suitably confused as to the meaning of this column, you are in august company. Sometimes one feels, as in the case of this author, that one must deviate from the norm and add a dash of spice to the already tantalizing recipe (if you choose to make it so) called life! This gust of wind, this August column, if you will, took it’s life at 3:28 ayem on Saturday the 23rd day of July. At 3:29 ayem I resuscitated the column in its present form, it was reborn so to speak.

I am hoping that anyone who might read this will do something that you did not plan to do this month. You could get in the car and drive somewhere with no destination in mind and then stop there to see what is! You could walk outside your house and go somewhere in the neighborhood you have never been. You might cut across an empty lot and discover it full. You may choose to wander past that do not enter sign and discover a universe you only read about in books. You might pick up an instrument and play it for the first time.
Your whole family could take a day off, a whole 24 hours, from technology and anything that plugs in and discover each other in your own back yard. If you have never paddled a floating device under a full moon, I highly recommend it. If you have not camped out in your own back yard with your family, I strongly suggest doing so. I am beginning this month in the august company of my mom and sisters and two nieces I have not met, and my two grandkids on a real cool property on the ocean in Friday Harbor. And though there are 4 Fridays in August, only one of them has a harbor.
It is my sincerest wish that all of you choose to do something wild and wonderful this month. I love being here in Petaluma, and I love everybody that loves what they do! Enjoy your Summer, follow your bliss, and above all, Practice Sustainable Enthusiasm!
The Bug One.