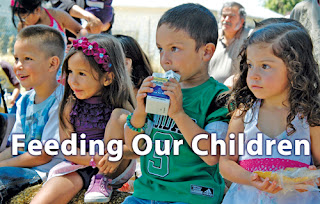 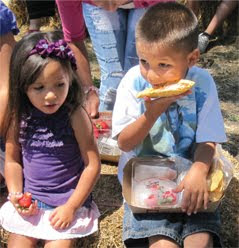 The children and their families also enjoyed the Imaginists Theatre Collective’s final grant funded bi-lingual performance of, “Art is Medicine/Arte es Medicina,” which they presented at five lunch sites this summer. This year’s bicycle powered, “Arte es Medicina,” featured original songs and music, the poetry of Garcia Lorca, puppets, whimsy, a giant ring master, and a gaggle of mysterious suitcases that opened to reveal theaters in miniature.

In addition to Bayer Farm, 41 other Sonoma County sites hosted summer lunch programs. Itzul Gutierrez, the food bank’s Community Programs Coordinator, said the number of kids accessing the free lunch program in Sonoma County’s towns is dramatically up this year. “Last year in June, we served 32,973 breakfasts and lunches,” she said. “This June, we served 43,361 meals.” Gutierrez attributes the increase to the economic downturn, to the reality that more parents are out of work, and also to the fact that summer schools have been shortened or eliminated entirely. In addition to a meal, the kids also have an activity portion, such as gardening education, as well as presentations from other local nonprofits, such as LandPaths. 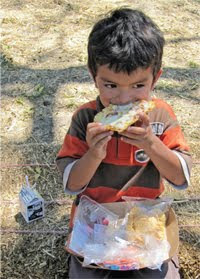 The summer lunch program officially ends August 9th. The REFB launches other child-hood nutrition programs in the fall 2011l, including its Snacks for Kids Program, which distributes nutritious snacks from August 2011 to June of 2012. Last year, roughly 325,000 individual snacks were served to children at 35 sites.

Other ongoing programs serving Sonoma County include the ongoing Commodity Supplemental Food Program (CSFP) serving families with children under 6 and seniors over 60, Farm Fresh Pantries, the Brown Bag Program for seniors over 60, and Farm to Family. Farm to Family distributions are at three elementary schools in Santa Rosa, which serves roughly 1,300 children and 500 families a week by providing fresh produce and food staples, as well as nutrition lessons on the featured “Harvest of the Month” fruit or vegetable. To learn more about any of these programs, including what it takes to qualify, or how you can help, call the Redwood Empire Food Bank, and ask for a Programs Coordinator, 523-7900. www.refb.org 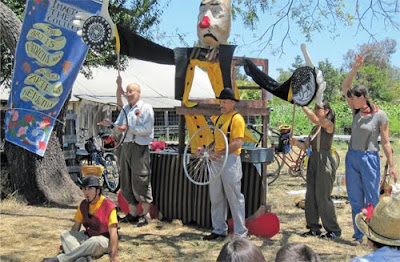