Water Wars by the Bay 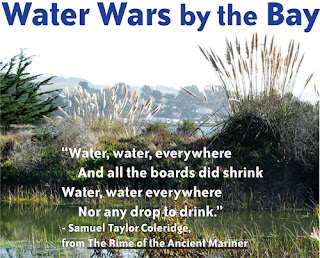 It takes little for Sonoma County residents to recognize the abundance of water shortage problems, whether along the Russian River, out toward Sonoma in the Valley of the Moon, or north and south in the notoriously water-strapped coastal communities.  With continuing viticultural and residential growth in an atmosphere of growing environmental awareness, the need for careful planning is vital.
Fresh Water by the Sea
Bodega Bay is in debate over a proposed new well next to the bay and by a wetland…Bodega Bay Public Utilities District (BBPUD) proposed Bay Flat Well Development Project. Controversy revolves around accessing the well’s impact on the adjacent Rail Ponds wetland, how much water is really needed, and what personal and financial expense surrounding property owners and rate-payers will have to absorb.
In a letter to Sonoma County’s supervisors from Richard Stabler (June 7, 2010), an environmental specialist and biologist working with Sonoma County’s Permit and Resource Management Department, he states that an estimated 65 gallons per minute (GPM) flows from groundwater sources to the northern Rail Pond.  And that a well at this site may reduce flow by as much as 45 to 65 GPM, severely reducing, or eliminating, existing freshwater habitat in this wetlands area.
Mr. Stabler requested baseline-setting tests to establish marsh salinity level, and an analysis of how levels may change after the well is completed and functioning.  He concludes that the “results of this evaluation may drive the need for a further biotic evaluation of the site”.
Even the report prepared for BBPUD by Wetlands Resource Associates agrees that this wetlands area will suffer impacts, but the assessment of impacts from well-pumping has so far been inadequate.

Lack of Public Awareness
The general public is relatively unaware of the project and its implications, indicated by citizens heard saying they had no idea this project is moving forward.  Recent hearings at BBPUD offices were held to ratify eminent domain actions against several property owners currently holding title to the lands where this well is proposed, yet none of those property owners were present.  When asked later why they were absent, they uniformly stated that they’d not been notified.
Nevertheless, the project is being pushed forward without the studies requested by private citizens, organizations such as the Audobon Society, Surfriders, and Bodega Bay Concerned Citizens, and staff members of various county and state agencies.  Many feel that the entire project is ill-conceived and should be scuttled, while others are willing to consider the project, provided a full Environmental Impact Report (EIR) is prepared before proceeding.

What’s the Current Status?
The Board of Supervisors has given straw-vote approval, with votes in favor by Supervisors Brown, McGuire, and Rabbitt, a vote against by Fifth District Supervisor Efren Carrillo, and none cast by Shirley Zane as a result of absence.  The BBPUD has approved eminent domain actions against landowners in the project footprint, and it is assumed it will proceed accordingly, whether or not those landowners wish to comply.

What’s next?
The Supervisors will revisit this project for a final vote on August 23, 2011.  Public comment is closed, but from there it will go to the Coastal Commission, not only because it is within the coastal zone, but because the CC holds title to a portion of the project area.  Citizens objecting to this project maintain the faith that the many environmental concerns will bring relief to this project, considered ill-founded by so many, and perceived to be rammed through a legal checklist that overlooks the qualities of environment and neighborhood that so many value.
And why would such a course be followed?  Again, BBPUD asserts need for more water, in this instance by referencing need to meet new (2008) State Health Department requirements.
The real question lies in the validity of that assertion, and whether BBPUD has countered with what seems to be the truth, namely, that viable water sources in Bodega Bay are scarce, and that the existing system is likely sufficient if given the maintenance it currently needs.
To expand water sources, not always practicable, especially in areas recognized to be “dry”, invariably ends up suspect, the more so when the public is poorly informed.  Is the expansion of Bodega Bay’s water sources a preliminary step toward development “build out”?  BBPUD asserts it is not, but that’s another story.

“It is difficult to get a man to understand something when his salary depends upon his not understanding it.”
–  Upton Sinclair