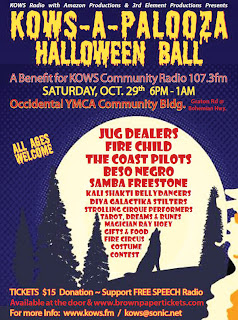 KOWSapalooza Halloween Ball
Occidental may never be the same. Early reports indicate that a caravan of musicians, magicians, belly-dancers, fire-dancers and stilt-walkers, including a seasonal contingent of ghosts and goblins, is heading toward this quaint hamlet. Astrological predictions indicate these wandering characters will congregate at the Kowsapalooza Halloween Ball, to be held at the Occidental Community Center, Saturday, Oct. 29, 6p.m. to 1 a.m.

This soon-to-be-legendary extravaganza, presented by KOWS Community Radio, will host an impressive musical lineup. Samba Freestone opens with polyrhythmic Brazilian percussion that promises to be pulsating, to say the least. Their instruments, shipped from the jungles of Brazil, solely for this occasion, include repeniques, rokars, ganzas, agogos, shekers and surdos. Not to mention caixas.

Beso Negro (Black Kiss), fresh from an appearance at Yoshi's San Francisco, mixes a fiery brand of Gypsy Jazz with elements of blues and folk. Self-described as "a vibrant new beast," this band is guaranteed to make swing dancers swoon.

The Coast Pilots prove that straight-ahead rock n' roll isn't dead yet, with their enthusiastic, guitar-driven sound. This Santa Rosa band has hit #1 on the pop charts of ReverbNation, which describes their songs as "addictive, melodic grooves for people that like to rock out in the safe confines of their Prius!"

The headliner, Sebastopol's highly popular Jug Dealers, will be playing through a midnight hour that promises to be hellish. Rumors that this building was constructed on a graveyard are highly exaggerated, but if ever below-ground residents wanted to party, this would be the event for them.

The Jug Dealers, who have been spotlighted on NPR's "All Things Considered," describe their music as "a mash-up of Classic American Roots, Soul, Jazz Improvisation, Hobo Funk and Ragtime." The band, which claims to be "moving backwards into the future," incorporates a jug and a whiskey box (hand-made Canadian stock only) into their act.

The KOWSapalooza Halloween Ball is a non-stop event, with a barrage of colorful performers displaying their talents between musical sets. If you're into belly buttons and scimitars there's the Kali Shakti Belly-dancers. Kalalea Fire will light yours. The Diva Galactica Stilt-walkers promise to take you higher. Illusionation Magic will saw women in half and, if time allows, put them back together. Volunteers accepted.

Come dressed in your Halloween finery and win the Costume Contest. Treat your tummy to yummy local foods; enjoy Halloween treats and games, as well as an eclectic array of booths selling curios and local arts and crafts.

Advance tickets ($15 minimum donation) for this family-friendly event, benefiting KOWS Community Radio in Occidental, are available at brownpapertickets.com. KOWS is a non-profit, all-volunteer station, broadcasting at 107.3 FM, and streaming 24/7 at www.kows.fm, featuring a blend of music, discussion and public affairs shows. KOWS is a clear-channel free zone.