Log on to this web site Classical Sonoma - below - to learn about concerts performed by exceptional musicians in the Classical tradition. Beth Zucchino turned me on to this site and organization and I want to share her passion with you... specifically a review of organ music performed by Shin-Ae Chun. But there's more - save the site with Bookmark so you stay informed of classical music concerts in Sonoma County: http://classicalsonoma.org/
POISE AND VIRTUOSITY IN ALL-BACH ORGAN RECITAL
by James Harrod
Sunday, March 21, 2010

Organ music enthusiasts had the opportunity March 21 to hear a flawless recital of Bach’s music, played by Shin-Ae Chun at Resurrection Parish on Stony Point Road. Ms. Chun is choir director and organist at Toledo’s First Congregational Church and her Santa Rosa concert was produced by the Creative Arts Series. 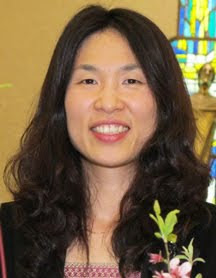 In the opening work Ms. Chun immediately showed great poise at the console with a clean articulated Baroque touch, even tempo, and steady “dancing” foot tapping energy. She played at a quick pace in virtuoso style with perfectly clean lines. The fugue was presented with clear phrasing and unclouded thematic figures. In the same way her interpretation of the G Minor Prelude and Fugue showed Bach’s recurring figures in perfect balance and measured touch. The lightning fast arpeggios of the first and last movements of the Piece d’Orgue were executed brilliantly. The Vivace from the Trio Sonata, arguably a great test of an organist’s nervous system, was played elegantly with three perfectly balanced musical voices.

The five short movements of the Concerto in D gave us a different but important Bach at the organ. In contrast to the church sounds of the Chorale Schmuecke dich and the majestic middle section of the Piece d‘Orgue, the Concerto is a transposition from a Vivaldi composition, written for a small string ensemble in the Italian style of the period and adopted by Bach for the organ in 1717. Ms. Chun played the concerto delicately with light articulation, even phrasing, and expressive registration, apropos of Vivaldi’s original.

The most discerning interpretation in Ms. Chun’s program may have been the Pastorella. This composition, often misplayed by organists with muddy sonics, was presented here with the clean delicacy of dew on a quietly pasture at dawn. Soft foundations were used for the opening 8/12 meter rocking rhythms and bell tone flutes and a “bag pipe” reed solo in the responding movements. The effect was refreshing!

Throughout the program, Ms. Chun used appropriate and varied Baroque stop registrations for Bach’s music which were sensitive and never too loud, the rich tones never overbearing.