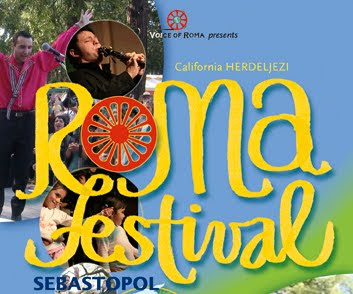 Please join Voice of Roma at the 14th Annual Herdeljezi Roma Festival, a celebration of Herdeljezi, a traditional Romani (Gypsy) neighborhood celebration announcing the end of the cold indoor season and the beginning of the warmer season of movement and outdoor life.

Survival from the winter and the seasonal renewal of life is celebrated through the sharing of music, dance, food and community. Romani musicians and dancers from around the world will be in Northern California to take part in the Herdeljezi festival beginning with film screenings Friday evening, and on Saturday, daytime and evening programs with workshops and live performances.

Celebrated for centuries by the Roma world-wide, Voice of Roma brings Herdeljezi to a much broader audience. Drawing upwards of 1,200 attendees (Roma and non-Roma alike) from Europe, the United States and Canada, the celebration begins Friday April 30th with a screening of Romani films with discussion at the Vets Hall in Sebastopol.

Events May 1st include music and dance workshops and a daylong festival (rain or shine) at Ives Park that concludes with a time-honored music and dance procession that replicates Mahala (the act of gathering the entire local community) and then moves back indoors to the Vet's Hall for an evening program of Romani music.

Other festival highlights include an exhibit and sale of embroidery and crochet work through Voice of Roma’s the Threads That Connect Us project. This micro-enterprise project features the products of refugee Romani craftswomen of Kosovo and Macedonia. Also included are wonderful children's activities with engaging Romani storytelling, face painting and more.

The festival, produced by Voice of Roma, an educational and charitable non-profit organization established in 1996 to promote and present Romani cultural arts and traditions, is supported by grants from the National Endowment for the Arts, the Alliance for California Traditional Arts, the Creative Work Fund, Walter and Elise Haas Fund, the William and Flora Hewlett Foundation, the James Irvine Foundation, and local business and community sponsors.

Tickets are available at the door and online at