YES vs. NO Public Restrooms in Guerneville Downtown 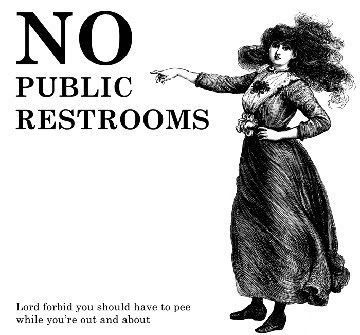 Dear Community:
I recently met with Mr. Herman Hernandez of Frank Howard Allen Realty (Guerneville) and had two telephone conversations with Mr. Lenny Weinstein regarding a public restroom for Guerneville; the former is a staunch opponent of a restroom downtown at the plaza and the latter has been waging a campaign for public restrooms for over 7 years. Also, the former has repeatedly stated that 'there will never be a public restroom at the plaza' and the latter is now seemingly reconciled to the placement of a public throne somewhere on the side streets. The perspectives of these two gentlemen well illustrates the positive imaginative workings that are at play in our community upon the matter; or the lack thereof. The signs upon nearly every business door or window, 'No Public Restroom' clearly enough illustrates and underwrites the reality.

I would like to share with Mr. Hernandez, Mr. Weinstein, the members of the Task Groups, the RRROC, and the community the following from John Gloag's Guide to Western Architecture, Volume 2. I hope the point of the following quote is clear enough and is of itself additionally a powerful argument in support of a public restroom at the Guerneville Plaza.; one that is a tribute to both the public it hopes to serve as well as the community which inspired it.

"Over a hundred years ago, Augustus Welby Northmore Pugin (1812-1852) published a book which he called Contrasts: or a Parallel between the noble edifices of the Middle Ages and corresponding buildings of the present day, showing the present decay of taste, and the first plate showed a town of 1840 compared with an idealized view of it in 1440. [Pugin writes]

"Those contrasting views were inspired less by a desire for objective criticism than by a passionate sense of loss -- loss of beauty and serenity and spiritual significance." To restore such properties to life was, Pugin obviously felt, the mission of the Gothic revival -- which was only part of the greater mission of uniting Christendom. Who could deny, after examining his drawings of an industrialized town in 1840, that the buildings themselves reflected the inhumanity of an age that created, and found good, such harsh, fantastic chaos?

Today, in many industrialized parts of England, medieval church towers and spires stand in mute reproof of our unlovely materialism, emphasizing the comparison between an age of faith and an age of greed, which Pugin found intolerable -- the more so because many of his contemporaries were incapable of appreciating what was missing from life. In plate after plate of his book of Contrasts, he attacked the shams and stupidities that had invaded civic life, and had produced an architecture which reflected only bleak utilitarianism."

Certainly if one looks at the Regional Parks restroom building (across the river from Guerneville) and the accompanying park fixtures there is a 'bleak utilitarianism' about them which while perhaps pragmatic is unimaginative, predictable, and all too commonplace. It is bureaucratic architecture at its mediocre average.

While there is no attempt to reference Pugin in specific regards to industrial architecture or the Gothic, the point here is that there is lack of imaginative faith and a creeping chaos incipient in Guerneville. One need only look at the designs of recent additions and the design of the forthcoming affordable housing project "Fife Creek Commons"; a cute name that belies an architectural elephant and a societal (community) absurdity.

An architecturally award-winning public throne at the downtown plaza would be a fitting tribute to the public (a public throne), a positive contribution to purposes of the Economic Development Task Group, and give old man Lenny Weinstein and our beloved patron Herman Hernandez something to mutually smile upon and shake hands over.

Lest we forget our redevelopment oversight committee already approved (and spent) the $10,000 to purchase land at the plaza and CDC staff and others have no doubt contributed another bucket full of money in their staff time.

Let's overcome Mr. Hernandez's, Ms. Kinnet's, and the other members and followers of that small coterie opposed to a public restroom where the public gathers (duh! The Plaza). Let us show them that to be positive is also upon them and that there is a win-win in a downtown public restroom at the Plaza.

Any feedback or flying spoiled fruits and vegetables can be flung to me at the address above; or should God grant you the inspiration: llbooks@pacbell.net.