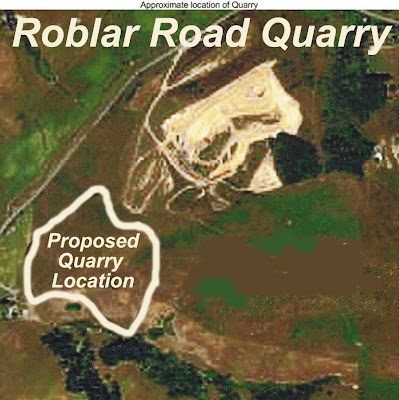 Board of Supervisors hearing dat:

June 8 CURRENTLY - Please check the B of S Website:
http://supervisors.sonoma-county.org/meeting_archive.aspx?sid=1001&id=1002

On April 1, Sonoma County’s Planning Commission approved the plan of developer North Bay Construction to mine gravel from 70 acres on Roblar Road in the West County and truck it over preserved open space land for the next twenty years. Final approval of this project is now up to the Board of Supervisors.

Please join Citizens Advocating Rural Roblar Quality (CARRQ) and other community groups to stop this quarry. It’s a terrible plan. If approved, North Bay Construction will have a green light to develop industrial mining and asphalt recycling operations immediately adjacent to the closed County landfill and preserved agricultural land. Just a few years ago, The County arranged for taxpayers to pay the same developer nearly $2.3 million through the Open Space District to PRESERVE the land next to the proposed quarry. Now the County wants to permit North Bay Construction to drive a MILLION gravel trucks during the twenty year project lifespan across a portion of this preserved land and over miles of neighborhood roads.

This plan is the product of close cooperation behind closed doors between County of Sonoma officials and the developer who is a long-time contractor for the County. There is an environmental study the County uses to justify the mining. The developer paid for it. County planning staff evaluated the project and wrote the report recommending its approval. The County tries to justify North Bay Construction’s planned gravel mining by saying the Roblar quarry will make gravel cheaper for County residents. However, the County did not produce evidence in the Environmental Impact Review to demonstrate that we need a new source of aggregate rock in Sonoma County. Nor did they do an analysis to justify the assumption that the price of aggregate will fall due to the development of the Roblar quarry. If the Board of Supervisors lets him, the developer gets to use up to 80 percent of that gravel for his OWN business, providing him with a competitive advantage in the marketplace.

Gravel Trucks on Open Space Land and In Your Neighborhood
The cheapest way the County could get past problems associated with running trucks in the most populated areas, widening a portion of Roblar Road to accommodate 18-foot wide gravel trucks and avoiding delicate wetland areas, is to allow an “alternate haul route” for the average of 300 one-way gravel truck trips per day. This plan will require permission from two private property owners and the Open Space District to grant “temporary permission” (for at least 20 years) for North Bay Construction trucks to travel across land encumbered by the open space easement approximately 2,000 feet before reconnecting on Roblar Road. Gravel trucks would then travel more miles on Valley Ford Road, Pepper Road (west of Meacham Road), Meacham Road, then down Stony Point to get to the freeway. That’s about 1,000 gravel trucks every week, 50,000 trucks per year and about a million trucks plowing through our open space and down our neighborhood roads for the next twenty years!

Risks to the Environment and Public Health and Safety
The proposed quarry project has more than 160 Conditions of Approval, many of which raise serious environmental issues that cannot be mitigated. For example, the gravel mining will dig out 570,000 cubic yards of gravel a year right next to the old County dump. The dump is unlined. No one knows how much pollution is inside it. Because the developer will dig right next to it, experts with the State of California who are not in the pay of the developer say the mining will threaten our groundwater quality and protected streams if toxins seep from the closed dump site.

Dynamite blasting and daily quarry operations will raise dust that has the potential to blow crystalline silica (a Proposition-65 listed carcinogen) eastward toward Dunham School, Cotati and into Petaluma. The County admits the quarry project is rife with serious risks.

How Can the County Government Run This Risk?
The answer is simple. The County has struck a deal with the developer so he will indemnify the County for the discharge of waste by his mining. While the County tells the public that gravel mining next to the County dump is safe, the County’s actions show they actually fear its danger.

As a condition of County approval, the developer must promise to indemnify County government for the damages caused by his mining. We doubt the developer has sufficient resources for that amount of liability. Even if he does, his indemnity covers only the assets of the County Government. It won’t cover injury to the people who live here, or the land and the water we use. The County will remain responsible in perpetuity for any leakage of toxins from the closed landfill, another potential costly risk to taxpayers.

What Can You Do to Stop the Quarry Project?
A new quarry mining project in an area that already has two landfills and an existing quarry on Stony Point Road should never happen. But it WILL unless you help stop it. If you are concerned about how your tax dollars are being used by the County, you should oppose this deal. If you care about maintaining Sonoma County’s rich agricultural land; care about public health and safety; enjoy driving or riding your bicycle in the Roblar and Valley Ford scenic corridors then learn more about what the County and North Bay Construction are planning to do.

Go to CARRQ’s Website at http://www.carrq.org and read the County’s reports and the letters objecting to the plan by the California Regional Water Quality Board, the Russian Riverkeepers, the Sierra Club and others. Ask your friends and neighbors to do the same. Become a Fan of CARRQ on Facebook—spread the word!

Call or write the County Supervisors who will vote on this give away NOW. Tell them NO to gravel mining and gravel trucking on our preserved land.

Heads in the Sand

While most informed people are concerned about creating environmental damage, Sonoma County is looking the other way.

In an unprecedented move they are requiring a developer to indemnify the County from the harmful effects of the West County’s Roblar Road gravel mining site. Why would the County approve a project that allows so much harmful potential to people and the environment? There are many issues in the Environmental Impact Report that can’t be mitigated, so the only protection provided by the county for those dangers is to protect the elected officials from potential liability.

Silica dust, a known and devastating carcinogen, will be blowing from a high hill into a residential area – just 600 feet away from the closest house and then down the valley to an elementary school, Petaluma and Cotati. This mine is planned to operate 6 days a week for 12 to 14 hours per day.

The County said that diesel fumes from 200 to 400 truck trips per day can’t be mitigated, but the Port of Oakland requires all trucks to be retrofitted with a device that diminishes harmful emissions. The County has not required this of the developer. Why not?

An old unlined landfill, abandoned years ago, has not been tested for contaminants and is sure to be full of them. This is right next to where blasting will be done to remove rocks for the next 20 years. It’s about 17 miles in either direction between the San Andreas Fault and the Rodgers Fault. Heads in the sand will not prevent earthquakes.

Even if there was currently a construction boom in Sonoma County, it is not reasonable to allow gravel mining in such an environmentally sensitive area.

Let’s hope our Board of Supervisors acts to protect everyone, not just themselves, from the consequences of this perilous project.