Plastic is Drastic: Save our Oceans - Fish and Birds

THE GREAT PACIFIC GARBAGE PATCH
Plastic is Drastic!
In America we throw away one million pieces of plastic
every 5 seconds.
By Michael “Bug” Deakin
Heritage Salvage

Captain Charles Moore of the Algalita Marine Research Foundation (AMRF) was the first to find the huge, floating plastic dump in 1997. On the foundation's website, he described it as "just absolutely gross – a truly disgusting plastic cesspool. [It] has to be burned into the consciousness of humanity that the ocean is now a plastic wasteland". 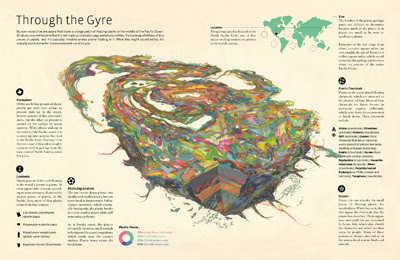 Earth’s oceans are comprised of five major gyres, or a confluence of ocean currents driven mainly by wind. The Central Pacific Gyre has collected up the plastic from Pacific Rim countries to form an “island” of plastic waste twice the size of Texas. Because petroleum- based plastics are non-biodegradable and float, any plastic that enters the ocean stays there, continually breaking into smaller pieces until it is ingested by marine life or deposited on the shore.

In the Central Pacific Gyre there were six kilos of plastic for every kilo of plankton near the surface. By 2008, that figure had risen to 45 to one. Plankton is one of the reasons the oceans are the biggest “carbon sink” we have – they help consume carbon through Photosynthesis. In the US we use more than 1 billion plastic bags per day!

Birds like albatrosses eat the larger pieces, which block their stomachs, while smaller pellets can cause fatal intestinal damage in fish. The long-lived Albatross can grow to an 11’ wingspan and reach a documented 50 years of age. They are rarely seen on land and gather on land only to breed, at which time they form large colonies on remote islands. Mating pairs produce a single egg and take turns caring for it. Young albatrosses may fly within three to ten months, depending on the species, but then leave the land behind for some five to ten years until they themselves reach sexual maturity. Here is a comparison of physical size, relative to a 6-foot human! 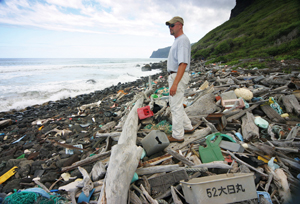 I use birds as symbols of the ocean because the water planet has no life without live oceans! They are my canary in a coal mine as it were! As one of many species on this planet, we as land based inhabitants have a tendency to forget that our original source of life, our biggest carbon scrubber, our raison’d’étre would be the big blue thing that laps our edges! The ocean is our lifeblood, and the beings that inhabit ocean keep it alive. We have spent more money exploring outer space than we have exploring our oceans, which we consider our fish farm and our handy garbage dump. We are not only guilty of overfishing and destroying habitat, now we are feeding them plastic! Every hour Americans throw away 2.5 million plastic bottles.

This is a Chris Jordan photo of the Albatross chicks at Midway . . . you can see the rest of them on his website at http://www.chrisjordan.com/gallery/midway/#CF000313 18x24 .

The baby chicks are being fed the plastic by their parents. They seem to perceive it as some special food and now the chicks are dying by the thousands. Stay tuned here and on KRSH 95.9 and on the Heritage Salvage website http://www.heritagesalvage.com/ for a new plan to bring awareness, and suggest solutions to our growing toxic plastic gyres.

Heritage Salvage and KRSH Radio 95.9 are looking for 3 families with 2 children each still at home to participate in a 3 weeklong study. This exercise will take place in March and will consist of the families tracking and saving all the plastic that they use in a week. The first week will be business as usual, the family must keep every little and large piece of plastic that will no longer be used by them.

(If every American household recycles 1 out of ten HDPE code 2 bottles, they will keep 200 million pounds out of the landfill each year!)

The second week the families will try to cut down using their own common sense and some suggestions from our listeners, and the third week we will be gifting the families and providing them with other alternatives to plastic use. We will be talking about the contest in the Gazette and the Gazette website, http://www.sonomacountygazette.com/ through my Green Scene Radio Show and on the KRSH 95.9. We will have the families on the radio and we will be comparing weekly collections of plastic. If you are interested in being one of the families, please contact us at Heritage Salvage at 707 762-6277 or email us at office@heritagesalvage.com or contact Katie at the KRSH at 707-588-0707 ext 123 or email katie@winecountryradio.net 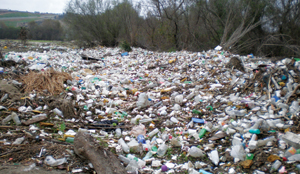 There are many more sites and agencies trying to explore possibilities of cleaning up, explaining this drastic situation and working within the system to stop our plastic jones! Here is a compelling site from Planet Green http://planetgreen.discovery.com/travel-outdoors/the-pacific-garbage-patch-explained.html and also the cartoonist Jim Toomey explains it delightfully with his very tongue in underwater cheek Sherman’s Lagoon on Tree Hugger http://www.treehugger.com/galleries/2010/06/cartonist-explains-the-pacific-garbage-patch-with-talking-sealife.php

I will be updating this site as we go, stay tuned for more, I will be concentrating on 1st getting people to stop using single use water bottles. 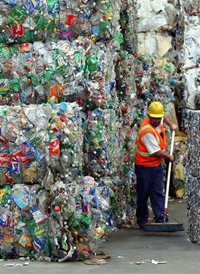 My proposal to focus energy on the solution rather than the problem is to make the solution financially viable. There are a lot of big hurdles to overcome in this campaign, and firstly, that would be the multi-billion dollar packaging industry! Next time you are at the market, check out all the goods in your cart and count the number of plastic items. The wax milk carton has 3 pieces; your single use water bottle has 3 parts, the lid, the ring and the bottle itself. There were a disturbing number of plastic bottle caps found in all the Albatross stomachs. How many pieces of plastic come out of one plastic disposable pen? How many pens do you toss each year? Much more water is used making plastic bottles than will ever go in to them!

It is up to us, the consumers, to drive this change. Sebastian Nau of Hillside Fire has written a compelling new song titled Calling, listen for it on the KRSH or check out their website http://www.hillsidefiremusic.com/ It will be our theme song! We are calling all of us!

The law firm of Spinner, Bottlenose and Dolphin has been retained to be chief litigators in huge Plastic Recall . . . a consortium of Ocean Dwellers have launched a massive recall campaign for the human species to take back their plastic . . . the class action lawsuit cites huge unpaid landfill (waterfill) bills, ignoring "dumping is prohibited" signs and grossly misrepresenting the lifespan of plastic. Spinner says this is a no-brainer, the evidence is perfectly evident.

Al Batross, chief spokesbird of Plastic is Drastic, calls it unprecedented. “When the evidence is twice the size of Texas, you can’t exactly sweep it under the rug!” says Batross, “besides, the ocean floor is already littered. Although, they have heard that Texas is now suing for being constantly used as a comparable size marker! "Suffice it to say," says Spinner, "the legal team has not swum around Texas to compare but they say they have a plastic map of Texas somewhere in the Gyre" . . . breaking news reported here at Heritage Salvage, on the Krush or on Kon-Tikileaks!

The Oceanistas have selected a compelling new song “Calling” written by Sebastian Nau and performed by Hillside Fire as their official campaign theme song for PLASTIC RECALL 2011 CAMPAIGN, WE'RE CALLIN, WE'RE CALLIN FOR YOU!

And check out this great Mockumentary narrated by Jeremy Irons http://www.youtube.com/watch?v=GLgh9h2ePYw, marvelous piece on the plastic bag!