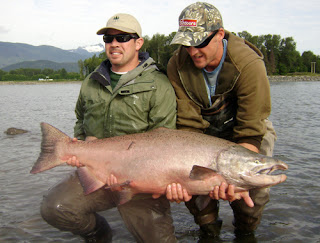 Catch and Release Story
On August 2, 2011 I was fishing on the Skeena river in British Columbia when I hooked this 60 lb. Chinook Salmon. The massive buck was caught while back-trolling a plug with guide Gordon Mckean of West Coast Fishing Adventures. The fish measured 49.5 "length and had a 30" girth. After a 20 minute battle of chasing downriver the fish was released unharmed and swam back to his spawning grounds. Watching him swim back up-river is one of my most rewarding moments as an angler.

With a handful of rivers for anglers to explore in Northern California and the Northwest this season, there will always be some big fish brought to shore. Whether you choose to release your catch is your choice. Just keep in mind, wild Salmon that weigh 45-100 lbs are very important to the life cycle of a fishery. They have the genetics to re-produce more large fish. They will also carry and fertilize a large number of eggs. A Salmon weighing 15-30 lbs is a more desirable size to harvest.