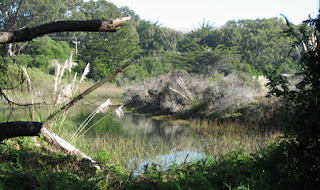 Tuesday, September 27th, the date set for the rehearing and vote regarding Bodega Bay¹s Bay Flat Road Well Project (Application PLP09-0057), has come and gone.  Why the rehearing?  Because the public had not been notified of the original hearing as the California Environmental Quality Act (CEQA) requires, as noted by Counsel for the Sonoma County Board of Supervisors.

With little additional data submitted since the July 12 supervisorial straw vote, the outcome echoed expectations.  Following a synopsis by the county’s Permit and Resource Management Department (PRMD) and the required opportunity for public comment, the final vote passed with a 3-2 vote.  For the proposal were Supervisors Brown, McGuire, and Rabbitt, while Supervisors Zane and Carrillo voted against.

Numerous representatives of Bodega Bay Public Utilities District and of Brelje & Race Engineering answered questions during the hearing.  The environmental community did not attend in equal numbers, but those present, spoke well.

Attorney Rose M. Zoia (Bodega Bay Concerned Citizens) strongly advised that certain aspects of the Subsequent Mitigated Negative Declaration (MND) were inadequate or not addressed at all.  Her testimony supplemented her report, filed earlier with the Board of Supervisors.  Hers and several biological, botanical, hydrological, and CEQA analyses and reports also filed previously stand in stark contrast to PRMD’s assertions. PRMD stated that «additional analyses and studies clarify and confirm the conclusions of the MND that the project will not have any significant impacts on the environment that will not be mitigated to a level of less than significant with identified mitigation measures.

Written testimony from North Coast Regional Water Quality Control Board, already known as opposing the project, was not included in PRMD’s project assessment.  In my opinion, this approval process was flawed, considering all of the opposing expert testimonies, the absence of opinion from regulatory experts and the nature of the public hearings held on this issue.

For instance, during public comment, the apparent contradiction between two maps prepared by Brelje & Race in January, 2010 was questioned.  One of those maps depicts wetlands indicators as being 57.13 feet from the project’s proposed chlorination shed, whereas the other presents a study area of 100 foot radius, fully devoid of wetlands indicators, surrounding the same chlorination shed.

Brelje & Race replied that preliminary maps are often furnished to clients for client use only, and so should not be given attention or credence in the final analysis.  The hearing provided no opportunity to ask for clarification. To me, this is an example of how project proponents got final say.

Maggie Braire (Bodega Bay Concerned Citizens) addressed several troubling project factors..  Noting that previous speakers had covered much of her testimony, she touched upon a range of potential problems - from water issues to procedural errors to the threat posed to the wetlands when chlorine is used mere feet away. She also observed that a recent rupture of the aging water main near the ponds could have damaged the fragile ecosystem had it not been quickly checked.

The owner of the property next to the proposed well site also testified. Raised in Sonoma County, she remembers the Bodega Bay wetlands as a natural treasure. While admitting to not yet being fully familiar with the project and its particulars, she expressed her reservations and distress over what she sees as the destruction of Bodega Bay's remaining rail ponds.

Subsequently, the Board and hearing attendees were assured that the condition of the rail ponds would be taken into account as part of managing water extraction and a reduced volume might result. I overheard comments to the effect that those assurances rang hollow without quantitative statements regarding how and when water extraction would be reduced and citizen oversight.

Even though the Board approved the project, the matter may not yet be closed. The Bodega Bay Concerned Citizens (BBCC) continues to oppose it.  The next step would be to bring this before the California Coastal Commission.

If you wish to support further pursuit of this issue, please mail donations to BBCC, Post Office Box 815, Bodega Bay, 94923.  The BBCC is grateful for your continued backing.