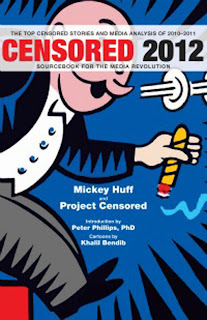 “Most journalists in the United States believe the press here is free. That grand illusion only helps obscure the fact that, by and large, the US corporate press does not report what’s really going on, while tuning out, or laughing off, all those who try to do just that. Americans—now more than ever—need those outlets that do labor to report some truth. Project Censored is not just among the bravest, smartest, and most rigorous of those outlets, but the only one that's wholly focused on those stories that the corporate press ignores, downplays and/or distorts. This latest book is therefore a must-read for anyone who cares about this country, its tottering economy, and—most important—what’s now left of its democracy.” — Mark Crispin Miller, professor of media ecology, NYU

Censored 2012: The Sourcebook for the Media Revolution, The Top Censored Stories and Media Analysis of 2010-2011 by Mickey Huff and Project Censored. In this volume, there are 500 pages of real news you can use, plus ample analysis that eradicates civil paralysis, and antidotes to our current Truth Emergency that will strengthen societal media literacy.


Former Project director Dr. Peter Phillips kicks off this year’s work with a dynamic introduction to understanding the NATO/US/military industrial media complex matrix of managed news and propaganda. Censored 2012 also once again proudly showcases the poignant and timely cartoons of Khalil Bendib. The Top 25 Censored Stories of the past year are not only announced, but this year, they are housed in Censored News Clusters that analyze the architecture of censorship in America by looking at the topical connections of the most commonly underreported stories. We go down memory lane with PC interns in Censored Déjà vu looking at past censored stories; endure the ubiquity of Junk Food News and News Abuse with professor Adam Bessie and Abby Martin of Media Roots; and highlight solutions for our many interconnected global problems with professor Kenn Burrows and the students of San Francisco State University in hopes to provide people with positive and proactive stories of change that are at the core of the media revolution. Media Democracy in Action is something Project Censored strives to achieve and we endorse and support many organizations with the same goals. This year, we proudly feature some of the best and brightest in that vein, both veterans and new comers to the scene.


This year’s TRUTH EMERGENCY section looks at Understanding Propaganda in Theory and Practice. Censorship, framing, and spin are all tactics that act to shape the public mind in democratic cultures. Understanding these requires context. A Brief History of Propaganda is offered by Dr. Randal Marlin and provides a solid foundation for the following chapters; professor Jacob Van Vleet writes on Mass Psychological Manipulation and the theories of Jacque Ellul; Dr. Robert Abele pulls the veil off the US Propaganda Machine; The Impending Demise of Net Neutrality is explored by Dr. Elliot D. Cohen; and Dr. Anthony Dimaggio deconstructs the Tea Party and Manufactured Dissent.


The final section of this year’s book, PROJECT CENSORED INTERNATIONAL, focuses on Human Rights and the Right to Know and introduces the collaboration between Media Freedom Foundation/Project Censored and the Fair Share of the Common Heritage, explained by Mary Lia. This section includes the Media Distortion of Nonviolent Struggles by Dr. Cynthia Boaz; journalist Ann Garrison on the US in Africa; Establishing Ghetto Palestine with journalist Jon Elmer; professor Robin Andersen looks at HBO’s Treme, and the Fractured Press Coverage of Post-Katrina New Orleans; Margaret Flowers, M.D., illustrates the Corporate Control of the Message in US Health Care Reform; and renowned midwife and author Ina May Gaskin shows Censorship of the True State of Maternity Care in the US.


Here is a list of the top censored stories from chapter one this year:


Censored 2012 is one of our greatest collaborative efforts consisting of 105 professors, hundreds of students, community members, and people from all around the world. We aim to expose media censorship and provide ways to be catalysts of the media revolution we need to restore the commons of human knowledge and education, establish and protect the right of the public to know what is going on in society, and work to maintain our democratic institutions– our culture of liberty. We hope you join us in these vital endeavors in critical times.


Help celebrate the 35th year of the oldest media research organization in the US by donating $35 for a signed copy of Censored 2012, or simply pick up a copy for yourself, friends, or a local library or school for only $19.95 each ($22.95 w/shipping).