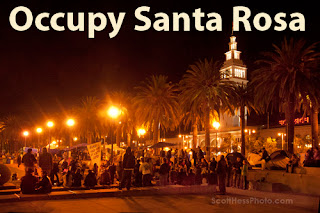 The inspiring grand opening of Occupy Santa Rosa on Oct. 15 was a great success. I was energized from the moment I saw and felt the surprisingly large crowd, which turned out to be some 3000 around City Hall.

Many aspects of that historic occasion were impressive. People were genuinely joyous to be together, as well as angry at the 1% who rule the United States, extracting their excessive wealth from the labor of the rest of us and the Earth’s natural resources. Yes, it is a class conflict, started by the 1%, which the 99% is finally mobilizing to struggle against. This has been building for a long time—locally, nationally, and internationally.
Of over 100 Oct. 15 occupation sites in the United States, small Santa Rosa was the sixth largest. Go Sonoma County!

Since then I’ve returned to City Hall four times, including for the first weekly anniversary rally on Oct. 22, which drew around 300 people. A steady crew of rotating persons have maintained a 24-hour presence. Rallies and marches are planned for each Saturday at 2 p.m. and General Assemblies to make decisions each day at 3:30 until at least Christmas Eve.

As an organic farmer, one of the things I appreciated about the original Oct. 15 gathering was that the organizers invited people to walk over to nearby Juilliard Park to attend an informative report on Genetically Modified Organisms (GMOs) and the damage they do to the environment and farming based on nature rather than against it.

We were invited to walk a couple of blocks to Juilliard on Oct. 22 again, but this time for music, poetry, and dance. You cannot have a real people’s movement without music and other art forms. Being angry and just complaining is not enough to change things. You must also attract people to your work and ideas.

Upon arriving at City Hall on Oct. 22 a man on the corner greeted us by waving a large American flag and holding a sign that said “Federal Reserve Bank Steals Your Money Every Day.” The Occupy movement is genuinely patriotic, trying to recover the country from those who stole it.

“When They Execute a Corporation,” read a sign held by activist Gary Abreim, 69, “You Know They Are Real People.” When asked why he had been coming to the occupations, Abreim explained, “There are seeds being planted here. I’m here to water those seeds. They are a yearning, a passion on the part of Americans to return to a democracy that we have lost.”

Only one uniformed policeman was at the occupation. He did not even have a helmet or hat on and was talking amiably with demonstrators and often laughing or smiling. At the nearby park where people were listening to music, many with baby blue Occupy Santa Rosa T-shirts, there were no visible police.

“Police should be seen as potential recruits to the movement, not as adversaries. Ultimately, they are accountable to the people,” according to a handout at the gathering. This is one of the seven non-violence principles guiding the occupiers, which was drafted by Cynthia Boaz, a Sonoma State University professor, who spoke at the Oct. 15 launch of the occupation.

Occupy Wall Street, the first of the world-wide occupations at over 1,500 sites has continued strong for over a month, with people joining it from all over. This is in spite of the threatening police presence there in the besieged financial capital of the world.

A Sonoma County friend who visited the New York occupation reported the following: “I was in NYC last week and went to the OWS site.  It was very moving to see so many people, the home-made signs, the diversity of voices and the determination.  Police presence was high, police cars and security ringing the park to create a menacing air but the protesters were conscious of staying within the law.  The media is trying to paint this movement as fringe but that is exactly the point if the 1% think that the 99% are the margins!”

Ah, those “home-made signs,” a distinguishing characteristic of this movement. Some of the ones seen recently include the following: “Lost My Job, Found an Occupation,” “More Equality and Empathy,” and “It’s Time.”

“I come to help out,” explained high school student Lorca Blanco, who has spent some nights outside City Hall and others nearby at the supportive Peace and Justice Center. “I like taking care of people. I remind them that they need to drink water regularly to hydrate themselves.”

“We go around the world pushing democracy,” Garick Rood, 27, explained, “but we do not practice it here. Corporate America is selling out the American dream, with interest.”

“Our judicial system has been corrupted,” Abreim added. We lack transparency and integrity. Since judges must run for office, that requires money and donors. So the system is biased. We see it even in the Supreme Court, Clarence Thomas being an example.’

At Juilliard Park I encountered three generations of one family. “I’m here because I’m sick of the dictatorship of the rich and the endless wars,” explained network engineer Kevin Ryan, 58. “I’m sick of casino capitalism, where the 1% win and take it all. When they lose they make the 99% pay. We are here to change this."

His daughter Simone Harris, 40, a public school teacher played with her son Asher, 3, and commented, “This is the most exciting thing that has happened in this country and the world in my lifetime. It’s both a protest and an alternative community. The organizers have insight into what we need. It had to be a continuous community rather than a one-time event.”

“All the cuts to education are the direct prioritizing of Wall Street over Main Street,” Harris continued. “Corporate interests have taken over education, reducing authentic student-teacher interactions. We now have a factory approach to education.” On her blog, theedutalk.blogspot.com, she has the slogan “No Public Education, No Democracy!”

Her partner, Shanti Cabinaw, 34, a nurse, described “the sense of overwhelm” in contemporary society and being worn down “by the daily grind. There is a feeling of being stuck with nowhere to go. This movement changes that. It is the antidote to fear.”

“This reclaiming public space by citizens is essential,” Ryan noted. “The physical environment is too often for consumers and we need to occupy it.”

On the day after the rally I drove to a meeting of the North Bay Organizing Project (NBOP), where they expected 600 people, which I doubted they would get. NBOP describes itself as “a grassroots, multiracial, and multi-issue organization comprised of 15 faith, labor, environmental, immigrant student and community-based organizations.” It is composed of some of the most politically active and connected groups in Sonoma County, some of whose members have been at Occupy Santa Rosa.

Within a few blocks of the Santa Rosa High School Auditorium where NBOP would meet, I noticed a large contingent of occupiers with signs headed to the meeting.

Over a dozen elected officials were introduced at this gathering inside doors. But it was the Occupy Santa Rosa youth who received the most rousing standing ovation. In addition to their street activities, some of the occupiers also seem to be trying more traditional routes of developing power and influencing political decisions by making alliances with a wide range of politically-active groups.

At the NBOP gathering, Ben Boyce of the Living Wage Coalition, who had been a featured speaker at the Oct. 15 rally, handed me what he described as a “manifesto,” which had the headline “Make Wall Street Pay. Jobs Not Cuts! Occupy America.” He noted, “The openness of the Occupy movement is an invitation to be creative.” He gave “a shout-out to the courageous young folks in New York who have inaugurated the American Autumn.” Others have called it an Awakening.

As people gathered peacefully in Santa Rosa, tension mounted elsewhere in the Bay Area in larger cities like Oakland and San Francisco, where city officials have issued eviction orders. But occupiers continue to ignore them. In Oakland they marched for three hours on Oct. 22, closing thoroughfares and freeway ramps and entering two banks, before returning to City Hall.

On the night before the first Santa Rosa occupation, some 500 persons occupied the nearby smaller town of Sonoma. Occupy Petaluma has scheduled its grand opening for Oct. 29, Sat. at noon in Penry Park at Washington Street and Petaluma Blvd. North, near Bank of America. More information at occupypetaluma.com.

The Occupy movement is a teaching moment. Among the analysts writing about it are UC Berkeley linguist George Lakoff. In a widely circulated article he describes the moral position of Wall Street as “the primacy of self-interest, individual responsibility.”

The 99% movement, in contrast, takes a moral position of social responsibility, as well as individual rights, where “democracy starts with citizens caring about one another and acting responsibly on that sense of care.” He sees “OWS as a patriotic movement, based on a deep and abiding love of country…The Public is what makes the Private possible.”

Conservative blogger Erick Erickson has started a reactionary “53 percent” project, which is the percent that pays federal income taxes.  Its message is that the movement fails to take personal responsibility and blames economic troubles on others. “Suck it up you whiners,” Erickson contends, adding that “there is still value in hard work, and individual self-reliance.” Others on his blog add that the protesters should “get a job” and “get a life.”

The 99% movement and the contrasting 53% project seem to exemplify the differences that Lakoff describes between two distinct moral perspectives.

A recent poll released by Quinnipiac University reveals that 67% of New York City voters agree with the protestors. A separate poll by Siena College reveals that 72% of New York State voters favor more tax on those earning more than $1 million.

The Occupy movement has already changed the U.S.’s political landscape, as well as the world situation. Some, especially among the 1%, think that it will soon fade. However, it shows signs of continuing and inspiring change. Stay tuned to see how things evolve.

May a thousand flowers (occupations) bloom around Sonoma County, California, the U.S., and our threatened globe, thus breaking the monopolistic hold of the 1%.

(Shepherd Bliss teaches at Sonoma State University and Dominican University and has run an organic farm in Sebastopol for the last 20 years. He can be reached at 3sb@comcast.net.)