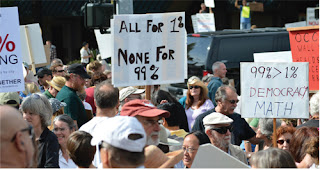 By Bill Wadsworth
Has the gridlock in Washington and Sacramento got you wondering if our democracy is functioning? Want to witness democracy really working? Roundup your mate and kids or, if single, all your friends and head down to the Santa Rosa City Hall. The time doesn’t matter. This democracy demonstration, Occupy Santa Rosa, is happening 24/7. Take your blankets and spend the night, which I did the first night and it’s a hoot, or just go for an hour or two. There were 900 Occupy rallies around the globe on October 15 and the Santa Rosa rally was the sixth largest turnout in the nation, just under 3,000.

The Occupiers and the Santa Rosa Police have had a congenial relationship to the credit of both. This will be tested in early November because the Occupiers set up tents at City Hall without a camping permit after the October, 29 rally and march. City Manager, Kathleen Millison, has asked the police to stand down regarding removing the tents until the City Council can review the matter of prohibition of camping at their November 1 meeting. The Santa Rosa City Council has made the friendly gesture of allowing a port-a-potty for the Occupiers. But can they allow a peaceful, nonviolent occupation about the state of our democracy to continue with tents?

Beautiful Chaos of Democracy
A call for democracy brings out the 99% and when we show up we’re a motley crowd. As you approach you’ll see these Occupiers holding up placards likely addressing many of your concerns about what’s happening in our great country, which holds so much unfulfilled democratic potential.

Have you recently felt burned out with all the gridlock, greed, and denial? Go  pick up a sign and stand in that crowd! The honks, shouts and waves from passersby will replenish your spirit and nourish your soul. Better yet, make your own banner and experience the democratic act of expressing your own personal concerns. Your opportunity has arisen. Go make a difference!

This motley bunch is a wonderful group of students, nurses, mechanics, realtors, out of work workers, retirees of all strips, houseless people,  healers, you name it and your all together waving signs regarding issues about which you feel passionate.
As you wave your sign, you will have the most interesting conversations with people with whom you seldom have the opportunity to share your concerns and hopes. As you return another day, you recognize faces and feel a sense of community grounded in equity, a rarity.

Finding Your Voice
The General Assembly (highly recommended) is where you get to participate and witness something very new about how democracy can function.  You will experience the people’s mic.

The speaker (why not you?) shouts out a short phrase and all of the Occupiers in earshot repeat the phrase loudly which amplifies the speaker’s message so that all can hear. Slowly, phrase by phrase, you hear the message and the pauses and repetition give the speaker and listener time to think and consider. Like slow food, this slow speak has its advantages. But don’t take my word for it. Go witness it!

See the side bar “Occupy Santa Rosa Basics” for the Occupy protocol.

I’ve attended the first General Assembly after the October 15 march and a few since. As our legislative bodies experience  gridlock, it’s very encouraging to be a part of a democratic happening where people present their different ideas, challenge each other, vote the issue up or down and then take action to get things to really happen. When you take corporations and greed out of the equation, are we discovering that humans can find common ground? Come find out.
You must witness this democratic action to know it! It’s good for your soul, your heart, your lungs, lowers stress, and the food is surprisingly good. But most of all you can be and feel a part of a global democracy movement and gain some hope that our great ideas about democracy can be truly fulfilled.

Stay home and give up and we may truly, then, only have an illusion of a democracy. The occupy movement will only be effective if enough citizens, like you, show up and not just once but on a regular basis. We must remember the old adage, “An opportunity missed is an opportunity lost.” And this opportunity is unlikely to come our way again soon. Go!

When: 24/7 On-going. See www.occupysantarosa.org for calendar

General Assembly: Scheduled gatherings where collective agreement or consensus is reached. There is no single leader or governing body. Everyone’s voice is equal. Anyone can propose an idea or express an opinion. The stack keeper keeps track of the order in which people have raised their hands to speak,  and indicates when people can speak.

The process: Once recognized by the stack keeper, the speaker shares what is being proposed, why it is proposed, and, if there is enough agreement, how it can be carried out. The Assembly will express its opinion for each proposal through a series of hand gestures (see below). If there is positive consensus then it is accepted and direct action taken. If there is not consensus, the responsible group or individual may revise the proposal and submit it again at the following General Assembly.

People’s Mic: Once its your turn to speak, shout, “Peoples mic.” The other occupiers who hear you will repeat it. Than loudly express your comment in short phrases, stopping after each phrase, so the others can repeat it.

Yes/agree/show enthusiasm: Hold hands above your head and move from side to side.

No/disagree: Point both hands toward ground or the thumbs down gesture.
To comment on issue being addressed: Hold both hands up palms facing each other, and move one hand forward as the other moves backward in a repetitious movement. Wait for the stack keeper to recognize you.

Point of process: Make a steeple with your hands.
That has already been said/get to the point: Revolving up raised hands like sports substitution.
Your intervention is taking up too much time: Crossed arms. Forearms come together at palms and move apart as if they were the hands of a clock.

Block: Cross your hands over your chest with fists clenched. This means you cannot continue to be a part of the actions if issue is adopted.

Positive Speech is encouraged by avoiding negative statements which close the door to constructive debate. This is a less aggressive and more conciliatory type of communication. It is useful to open a debate with the points that unite before dealing with the points that separate.

Special Rules: No smoking anything or drinking alcohol. This is a nonviolent happening. Do not engage negative comments from passersby. Stay out of the street. Obey city ordinances.