Marine Down in Police Attack on Occupy Oakland
By Shepherd Bliss
Marine Scott Olsen made it through two tours in Iraq without an injury, but back home in the United States he was critically wounded by a police riot. Heavily-armed police injured Olsen and other unarmed citizens on Oct. 25 when they attacked the non-violent Occupy Oakland.

Olsen, 24, had his skull fractured by a police projectile and is experiencing traumatic brain swelling. He apparently sustained the most serious injury nationwide among occupiers and is at risk for brain damage.

Olsen’s roommate and buddy Keith Shannon, who served with him in Iraq, rushed to Highland Hospital, as did other friends. The hospital described him as being in a “serious but stable” condition. He apparently had been unable to say his surname and was sedated on a respirator. “They are waiting for a neurosurgeon to examine him to see if he needs surgery,” Shannon told the press.

“He doesn’t agree with the way the banks aren’t regulated, the way they drove the economy in the ground,” Shannon added. Olsen apparently wants people who think that they are above the law—like bankers—to be brought to justice for their crimes.
Riot police from some 17 forces participated in the unprovoked attack that led to some 200 arrests of members of a determined, focused but restrained crowd. The estimated cost of the overwhelming force using shock and awe tactics was some $2 million. Some protestors walked straight from jail back to the occupation, defiantly chanting “We’re Still Here.”

Over 1000 demonstrators took to the streets the day after the violent attack. Rather than being intimidated by the police violence, they are responding by exercising their constitutional right of assembly. Chanting “Whose Park? Our Park!” demonstrators tore down a police fence last night.

Some consider the attack to be a practice drill for things to come. The mayors of at least two other large California cities, San Francisco and Los Angeles, have threatened similar evictions of occupiers. In New York a group of police refused to move against protestors and Occupy Wall Street is chanting “Oakland is New York” in solidarity. Chants such as “Occupy America” and “Occupy Together” can be heard around the U.S.

Various videos documenting the assault on Olsen have been posted on YouTube. One reveals that he was hit in the head at close range. Demonstrators rush to his aid, as an Oakland cop fires a second canister at the crowd. Wearing his Marine jacket, Olsen is carried through tear-gas smoke to the sounds of shrieking people. The footage reveals that the explosion that downed Olsen came from a flash bang grenade, which the police deny they used. At a press conference they say they only used tear gas and baton rounds.

The injury to Olsen is a shot being heard around the world, like the Kent State murders during the Vietnam War, though so far less deadly. Occupiers and supporters are calling for the prosecution of the police responsible for this brutality, which could impede future police violence.

Iraq Veterans Against the War, of which Olsen is a member, writes that he “is one of many veterans who have returned home and gotten involved in the Occupy protests taking place in hundreds of cities around the nation. Veterans like Scott recognize that they are part of the 99% who face uncertain economic futures, including few job prospects and rising tuition costs. Rates of homelessness and unemployment are higher for veterans than for their civilian counterparts.”

“I’m absolutely devastated that someone who did two tours of Iraq and came home safely is now lying in a US hospital because of the domestic police force,” his friend and hospital visitor Adele Carpenter told the UK’s Guardian. Olsen served in Iraq in 2006 and 2007 with the 3rd Battalion, 4th Marines and left the military in 2010. It is ironic that Olsen’s injury was sustained in the streets of Oakland, which the police transformed into a war zone.

This incident disproves lies told by the corporate media who try to demonize the diverse members of the Occupy movement with words like “hippies.” In the four times that I have been at Occupy Santa Rosa, I have seen numerous Veterans for Peace, professors, physicians, families, and many students and others who do not fit that demeaning stereotype. Diversity is the signature of this movement for the 99% against the 1% who rule the United States.

Olsen’s parents have rushed from Wisconsin to be at his side. His friend Dottie Guy, also an Iraq War vet, is one of those maintaining an overnight vigil at the hospital. “He always had a smile on his face,” she said. Others have described him as a “peaceful man with an angelic face.”

The attack on Olsen and many others has been met by the resolve of the Occupy movement to intensify its struggle. Oakland’s historic Ella Baker Center for Human Rights sent out an email telling the story of another person, Pete, 31, also wounded that night.

His response:  "I can't believe Oakland would take that level of aggression against people doing nothing threatening. I still can't believe it. But I will go back. This is our city, I hella love Oakland, and I am going to fight to protect our freedoms."
“We’re not leaving,” demonstrators chant. Meanwhile, contradictions within the Oakland City Council are developing, with some members supporting the demonstrators and criticizing the mayor.
Here in Sonoma County, where I live, an hour from Oakland by car, Occupy Santa Rosa, which began on Oct. 15, continues to have a daily presence outside City Hall. Police and occupiers have collaborated to keep the occupation legal and peaceful. In fact, the occupiers called on police recently to clear the area of transients passing through while intoxicated and stealing things.

I first heard about a Marine being downed from a radio report while on my way to one of the vets groups in which I participate. I stopped  the car. Images flashed through my mind of how important vets were to stopping the war of my generation—Vietnam. We will have more injuries and losses in this struggle, but we were successful in finally pulling the U.S. out of Vietnam. Now we have another task here in the 21st century--vets and others working together for a government “by the people, for the people, and of the people.” It’s time to take by America. 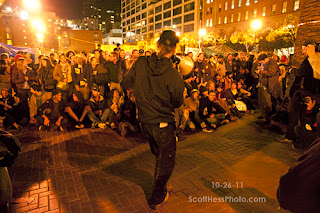 The Occupy movement brings hope, enthusiasm, determination, anger, joy, and the possibility of a better world. But we should expect the 1% and their managers, including Pres. Barack Obama, to begin firing, in various ways, on this Second American Revolution.

The Occupy movement did an accurate structural sociology analysis to target Wall Street. It went from those wounded downstream, in this case Olsen, to upstream to find where the wounding originated—Wall Street. It then developed a mass movement based not on a single event but on the development of ongoing learning and action democratic communities.

The Occupy movement is beyond merely political action or social action. It is cultural action that seeks a change in consciousness and deeper change. Its tools include conversation and dialogue among the many, which has the possibility of changing history. We are still be at the beginning of this movement, rather than the end that the violence tries to enforce. The Oakland police are likely to be defeated, as was the all-powerful U.S. military in Vietnam, and now in Iraq and Afghanistan.

It is one thing to talk about democracy, as President Barack Obama does so freely, and another thing to practice it directly, as the growing Occupation movement does on a daily basis.

(Shepherd Bliss teaches at Sonoma State University and has run an organic farm for the last 20 years. He is a member of the Veterans Writing Group (www.vowvop.org) and can be reached at 3sb@comcast.net)