Today, Sunday, October 23, 2011, my wife Joyce and I went up to Healdsburg to experience some friends of ours Rob and Ann, who over the past few months have been putting in some pretty fierce overtime creative action to get their new local and personal Market open, hoping as Ann has told us, to get that feeling that she had when she was a kid, growing up and she headed on down to grab a quick slice of local Healdsburg color.

As we drove in the parking lot to acquire a spot before the crowd would fill the area with lots of chatter and some great music being scattered out into the atmosphere, from the band known as Rovetti and the Meatballs, we already could feel some anticipation in the air.

Ann is the full-time caretaker, along with a few wonderful people who help build the character that Ann wanted so much to bring to her community.  Rob has a normal working hour job, and comes and adds a little spice to their local market when he arrives late in the afternoons.

Today, they were getting acquainted with what they hope will be a steady local crowd, looking down the road as they try and establish a reputation throughout Sonoma County for everyone to come and experience her attempts for culinary road trips that take you thru various flavor profiles, combined with home style cooking and that multi-generational family atmosphere.

The range of samples today was quite diverse, taking in Sliders of a number of different meats, Deli salads, three different soups, including white bean, tortellini with sausage, and a third that I couldn’t put my finger on, that had a spicy finish and contained large chunks of pulled pork.  They also had a number of different sweets and lots of different drinks out near where the band played including Henry Wienhard’s Root Beer and Some pretty fancy green tea drinks.  There was a High School Booster’s Club under a tent, selling Corn Dogs for two dollars that had some famous type of hotdogs with a really light texture and a thin, light and non-greasy batter that went down quite smoothly. 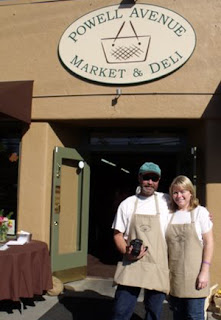 There were lots of kids, and lots of seniors, that spent time dancing to themselves and were constantly tapping their shoes to the rifts of the band.  Even one of the singer’s Grandparent’s showed up, and they played Sweet Georgia Brown for her after she took her seat.

Rob took Joyce and I for a tour of the cooler, and Joyce took numerous furtive glances of the diverse liquid refreshment they were offering their customers.  I tried to get a cross section of the crowd that soon developed after our own arrival, and later came in contact inside as Joyce and I were going around to say goodbye to Rob and Ann, and Robs Parents, with an Irish accented woman, who was introducing her friend that writes for the Healdsburg Tribune newspaper.

After we left, we both agreed that we could of just hung out there all afternoon, tasting the culinary diversity, and listening to the band play their collection of eclectic music.  We also enjoyed all the pleasant, useful and colorful trinkets they all seemed to be circulating around the crowd with, like personal grocery bags with their logo on them, little stakes with Daisy seeds on them, and bottle opener’s.  We hope the best for our friends Rob and Ann, and love the idea of having local color in all the little Markets we have around Sonoma County.

Joyce and I hope all of you will take a shot at showing up and getting to know Rob and Ann and the people they offer for your hospitality needs, so we can keep these people in business for years to come.