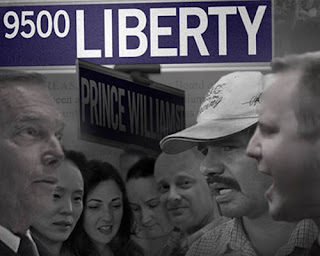 On Friday October 29th the Police Accountability Clinic and Helpline is inviting the public to join them in a free screening and discussion of the documentary "9500 Liberty" at 719 Orchard St, Santa Rosa CA beginning at 7pm.

"9500 Liberty" is a documentary about what happened in Prince William County, Virginia when elected officials adopted a law requiring police officers to question anyone they have "probable cause" to suspect is an undocumented immigrant. The film reveals the startling vulnerability of a local government, targeted by national anti-immigration networks using the Internet to frighten and intimidate lawmakers and citizens. Alarmed by a climate of fear and racial division, residents form a resistance using YouTube videos and virtual town halls, setting up a real-life showdown in the seat of county government.

The devastating social and economic impact of the “Immigration Resolution” is felt in the lives of real people in homes and in local businesses. But the ferocious fight to adopt and then reverse this policy unfolds inside government chambers, on the streets, and on the Internet. "9500 Liberty" provides a front row seat to all three battlegrounds.

Immediately following the film screening, there will be an open discussion about the issues raised in the film, and how to build the strength of our movement for justice and police accountability. Driver's license checkpoints, car impounds, police targeting immigrant communities are all continuing issues here in Sonoma County. Sonoma County Sheriff Cogbill claims that immigration status has no effect on his enforcement policies, while at the same time regularly holding people not convicted of any crime for Immigration and Customs Enforcement. Sheriff Cogbill has also made it clear that he will not follow direction from the Board of Supervisors regarding his department’s policies concerning immigrants.

The Police Accountability Clinic and Helpline (PACH) exists to document police abuse, and to help survivors of Police Abuse find safety and support. PACH participates in community based civil rights education. PACH meets the second Tuesday of every month at 719 Orchard St, Santa Rosa, CA 95404. We can be contacted at 707-542-7224 or by e-mail at: info@pachline.org