Beth Zucchino performs at Church of the Incarnation 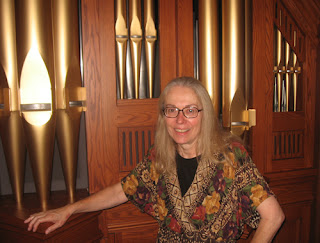 On Friday evening, October 8, an audience of approximately 35 people were beautifully entertained by Beth Zucchino at the 30 minute “Twilight” concert at Church of the Incarnation. Beth performed the “Sechs Stuecke in kanonischer Form,” Opus 56, by Robert Schumann. The six studies were originally written for pedal-piano.

The passion that Beth has for this music was clear by both her performance and in the remarks she made about the music. Beth made the music come alive without overstating any selection. All six were well balanced as a group.

Beth began learning Opus 56 last July. She chose it because it is gorgeous music, her own personal love of the literature, and because 2010 is the 200th birth anniversary of Schumann. Beth spoke of the zeal which both Robert and Clara Schumann had for the contrapuntal works of J.S. Bach and spoke of the personal and professional setting in 1845 for the Schumanns.

In the program notes, Beth listed each selection with its intended expression in German, with a brief English translation. Beth volunteered that her effort in translating the German was of particular interest to her:

I asked Beth about her registrations. She has generously described them all, even though she never actually wrote them down, either at home or at Church of the Incarnation during her preparation. (Perhaps they are still on Memory Level 16):

Beth used the swell pedal with discretion, mostly following the composer’s indications.
The inner structure and character of each study was presented very clearly by Beth through her articulation and registration choices. The overall structure had a momentum from beginning to end. An underlying gentle, rhythmic pulse gave the entire program a sense of vitality and momentum.

After the concert I asked Beth if I could look at her score. Several days later I realized there were hardly any pencil marks in it from her study and practice. I asked her about this. Beth wrote back that “she has always had a strong sense of playing various styles sans academics. She wanted to leave her heart free to interpret in any given moment what inspired her.”

I then understood why I had tears in my eyes as Beth was nearly finished playing Study No. 6 and I wished she would repeat the entire program. All sorts of visual images were going through my mind. It was as though the story was ending and I was a captivated reader not wanting to close the book. Certainly all of us could have listened to another 30 minutes of such an expressive and well-tailored program