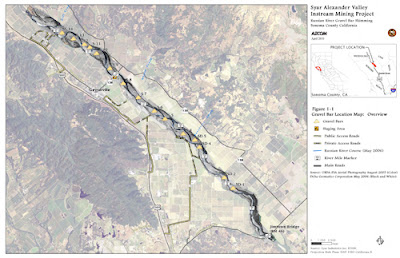 The Alexander Valley Association will host a public forum on the proposed Syar Industries In-Stream Mining Project at the Alexander Valley Community Hall, 5571 Highway 128, Geyserville on Saturday, October 16 from 10:00 AM to 12:00 Noon.

The project, which would mine gravel and sand along the Russian River from Jimtown to Asti, is due to be considered by the Sonoma County Board of Supervisors later this month. Syar has requested a 15 year mining permit. Hours of operation would be 6:00 AM to 9:30 PM or dusk, Monday to Friday, from June through October.

The project’s Environmental Impact Report (EIR) says that a truck route will be built along the riverbank, complete with several bridges, to transport the gravel from 15 mining sites along a 6.5 mile stretch of the river. Trucks would join public roads at Geyserville en route to the Syar processing plant on Healdsburg Avenue in Healdsburg. Up to 480 truck trips per day are envisaged.

Critics of the plan say that its massive scale is not compatible with the surroundings in the Alexander Valley, and that it will hurt Healdsburg’s tourism and winery businesses. They contend that the impacts from dust, diesel fumes, traffic, and noise will affect the river and people’s health and safety for years. The project’s supporters say many of these impacts will be mitigated. They also point to the reclamation and fish habitat improvement elements in the EIR as beneficial conditions of the proposed mining permit.

Summary: According to its Environmental Impact Report (EIR), the project’s primary objective is to produce a sustainable yield of aggregate for local demand while improving aquatic habitat. A truck route with several bridges will be built along the riverbank to transport the gravel from 15 mining sites along a 6.5 mile stretch of the Valley. Trucks would join public roads at Geyserville en route to the Syar processing plant on Healdsburg Avenue in Healdsburg. Up to 480 truck trips per day are envisaged. Hours of operation would be 6:00 AM to 9:30 PM or dusk, Monday to Friday, from June through October.

On September 23rd, after a few questions from two of five Sonoma County Planning Commissioners, they approved the proposed project for mining 350,000 tons of sand and gravel (that salmon use for spawning) per year for 15 years. Several audience members including your Riverkeeper spoke about how the project would create massive impacts on the community and the River. One speaker, a retired hydrologist who was waiting for another hearing, was moved to speak against it because so many other Rivers in California have outlawed mining due to the ecological impacts. This project will turn Alexander Valley into an industrial mining zone each summer with up to 480 gravel trucks a  day from the Geyserville to Healdsburg while belching up to 958 TONS of CO2 in three months each summer.
Now, it goes to the Board of Supervisors for a vote on October 26th. Riverkeeper will be providing template letters next week for people concerned about the impacts to the River and our community.

If you never seen gravel mining along the river firsthand check out our short You Tube video at:
http://www.youtube.com/watch?v=Ur8GEji_100

Syar Mining Project Impacts & EIR Issues:
- 480 double tractor-trailer trips per day for months from Geyserville to Healdsburg
- 958 tons per year of CO2 and hundreds of pounds of PM10 & PM 2.5 fine particulate air pollutants every day - leading to increases in respiratory disease.
- Extract gravel in amounts that will cause downstream erosion
- No evaluation of old dirty haul trucks driving up to two miles on riverbed
- No cumulative impacts analysis for increases in plant emissions and mining operations from increased mining

Since 1972 the Alexander Valley Association has represented families, farmers, and businesses in this Sonoma County appellation. AVA was created to preserve the natural beauty that endows the valley and to strengthen the spirit of community among us.