Hands for Japan - SSU Students reach Out to Help 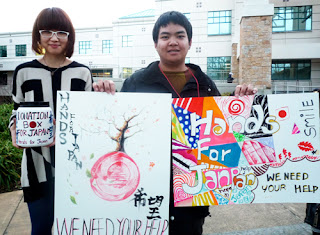 Fusao Yoshimoto is a student organizer for "Hands for Japan," the grassroots student fundraising group that has so far collected nearly $500 for the victims of last week's 9.0 earthquake and subsequent tsunami.

"As Japanese students and Sonoma county residents, we want to support the people who are presently suffering in Japan," reads the group's Facebook page.

The campaign began over the weekend, as students looked for a way to help the thousands--if not millions--of people impacted by last week's catastrophe.

"We are trying to raise $10,000 to donate to the Red Cross Japan," reads the group's mission statement.

They are also educating people on other ways to donate, such as texting to various organizations to auto-donate a small amount of money.

Various campus groups are now becoming involved with "Hands for Japan," including the community service group JUMP and members of the student leadership.

"We're just overwhelmed by the support from everyone right now," says student Kendall Shelffo, a volunteer at the American Language Institute. Currently, "Hands for Japan" is accepting cash or personal checks, and is working with the on-campus branch of US Bank.

"We will be responsible for your donations, and we will keep it securely in our bnk account," the group assures. "We will send 100% of your donations to Red Cross."
Yoshimoto adds that the group will continue to collect donations for as long as it takes.

For more information, or to donate to Hands for Japan, visit their Facebook page at http://www.facebook.com/pages/Hands-for-Japan/205696472789459 or email handsforjapan@gmail.com.