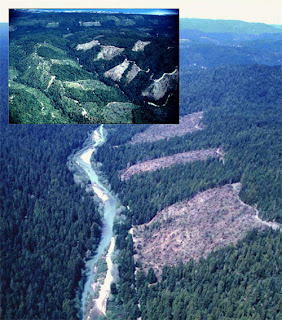 The ruling in the case, Sierra Club v CALFIRE, is a win for environmentalists who for years waged a David and Goliath-style battle in an effort to scale back logging at the Bohemian Club’s 2,700-acre Bohemian Grove near Monte Rio, 75 miles north of San Francisco.

“The ruling is significant because it requires CALFIRE to consider reasonable alternatives that are less damaging to the environment,” said Paul Carroll, the Sierra Club attorney who successfully argued the case.

Environmentalists had opposed the Bohemian Club’s Non-industrial Timber Management Plan (NTMP) , which sought CALFIRE’s approval to log up to nearly two million board feet per year, including some old growth, at the Bohemian Grove. The Sierra Club’s lawsuit maintained that the Bohemian Club initially overstated the amount of timber that could be sustainably harvested, in violation of CEQA.

The Bohemian Grove, the Bohemian Club’s elite enclave on the Russian River, contains magnificent redwoods and Douglas fir, some more than 1,000 years old.  Coastal old-growth redwoods remain on only 4 to 5 percent of their original range— a 450-mile band along the Pacific coast from Big Sur, California to southern Oregon.

The Bohemian Club’s NTMP drew hundreds of public comments, more than any other in the history of California’s 1972 Forest Practices Act. In this ruling, Judge Chouteau questioned how CALFIRE could consider clear cutting as potentially feasible, but reject the public’s request for less damaging alternatives.

“This ruling affirms that public participation in the permitting process is essential to protecting the state’s remaining old growth,” said John Hooper, a long time forest activist and former Bohemian Club member whose objections to the logging plan led to the lawsuit.

The Bohemian Club had logged 11 million board feet between 1984 and 2005, including old growth trees. At least nine old-growth stands were still intact, but Hooper found that these hadn’t been disclosed in the Bohemian Club’s NTMP.  State regulations require landowners to divulge “special and unique” resources on their property so that logging plans can be accurately evaluated. CALFIRE requires that NTMP timber harvest goals be sustainable.

Scientists from UCLA and UC-Davis disputed the Bohemian Club’s sustainability and fire safety claims. The California Department of Fish and Game also criticized the plan.

"From start to finish, this was clearly a logging project, not a project to reduce the fire hazard,” said Philip Rundel, Distinguished Professor of Ecology and Evolutionary Biology at UCLA. “The harvest rates and cutting schedules were totally inconsistent with the plan’s claims of restoring natural forest conditions.”

As a result of the criticism, the Bohemians scaled back their NTMP. The Bohemian Club resubmitted its NTMP  in 2009, but offered no “feasible alternatives” to the proposed logging, as CEQA requires. CALFIRE approved the plan anyway, just two days before stronger regulations protecting Russian River salmon and steelhead took effect.

Concerned about the challenge to the integrity of CEQA, the Sierra Club filed suit in January 2010. In today’s ruling, the Court ordered CALFIRE to rescind its permit to the Bohemian Club and start over.

“Now that the court has rejected the Bohemian Club's NTMP, we’ll be working closely with CALFIRE and the Bohemian Club to come up with a new timber management plan,” said Jay Halcomb, chair of the Sierra Club’s Redwood Chapter. “In a way, our work is just beginning. We hope it will proceed in a more constructive manner than in the past. Restoring old-growth stocks will help California combat climate change.”

The Bohemian Club is synonymous with power, wealth and influence. Founded in San Francisco in 1872 by a group of journalists, artists and musicians, the Club soon began to accept government leaders, bankers, and industrialists as permanent members. Members pay $25,000 or more to join the exclusive, male-only Club in addition to annual dues that entitle them to participate in "encampments" held each summer at the Bohemian Grove.

The Bohemian Club is estimated to have 2,500 members. David Rockefeller, George H.W. Bush, Henry Kissinger, Donald Rumsfeld, George Schulz, the Koch brothers, members of the Bechtel family, and Clint Eastwood, are among the more illustrious members. Local Bohemians include musicians Steve Miller as well as Mickey Hart and Bob Weir of the Grateful Dead.

“Today’s victory shows that no matter how influential a group may be, it is not exempt from the law,” said Rick Coates, executive director of Forest Unlimited in Cazadero and a veteran of many redwood battles.