When did you last attend a sock hop, or even hear of one? On March 19 at 7 pm, at the Occidental Center for the Arts, radio station KOWS will take you back to those early days of rock n’ roll when sock hops, dances usually held in high school gymnasiums, where shoes were removed to protect varnished floors, were all the rage. 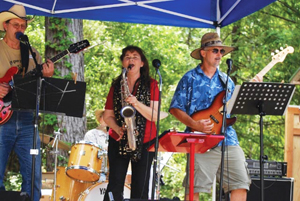 The Passions will be playing those oldies but goodies from the mid-1950s to early 60s, dreamy ballads and rockin’ dance numbers, including group dances such as the Limbo and the Stroll. The band is led by two disc jockeys from KGGV in Guerneville; Jimmy the Rock on guitar, and Sister Glitz on saxophone and vocals. Watch for her forays into the crowd, blasting away on her horn. Remaining members are guitarist David Nestor, drummer David Whitehead and bassist, Roadkill. Between live sets, some of Sonoma County’s top deejays will be spinning rare tracks from that bygone era.

And, as if that isn’t enough, the event will also celebrate the full moon, the spring solstice and the return to Daylight Savings Time.

Yummy treats will be available at the dessert bar with soda, juice, tea and coffee to slack your thirst after a frenetic spin over the dance floor.

Gone are the days when rock n’ roll was a battleground between generations, when entrenched bastions of Puritanism and racism tried their best to pull the plug on a “new” musical style, based on compositions black people had been playing for years.

Radio was the front line of this cultural revolution; platters spun by late-night maestros catering to the impressionable minds of schoolkids, tuning in their transistor radios after their parent’s world went to sleep.

“What I like about early rock n’ roll is the feeling that grabs you, a simplicity. I like being able to hear each instrument,” says Sister Glitz. “Also the rawness; you can tell they were having fun with it.” Her radio career began at age four when, on a visit with her mother to a radio studio, the youngster tripped over a cord and unplugged the whole station.

KOWS radio in Occidental, which recently celebrated three years on the airwaves, is commercial-free and collectively operated. Volunteers produce their own shows, bringing their music and guests to the studio. The signal is available at 107.3 FM locally, or streaming at www.kows.fm. If you’re interested in becoming involved, whether on-air or off-air, contact the station at kows@sonic.net or 707-874-9090, or download an application at the website above.

The Occidental Center for the Arts, formerly Harmony School, is located at 4008 Bohemian Highway, on the north end of town. The admission price of $10 all goes to keeping radio alive in Occidental.