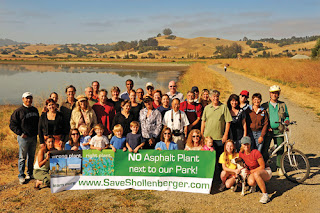 We are very disappointed by Judge Chouteau’s failure to find in favor of our community coalition¹s legal challenge to protect Shollenberger Park, the Petaluma  River and our community’s health and economy.  Judge Chouteau has  rejected our plea to preserve the gateway to Sonoma County from blight  and protect the people of Petaluma from Dutra¹s industrial pollution.


Judge Chouteau has dismissed all of our claims, and seems to have  adopted county counsel’s and Dutra's attorney’s arguments without  question.

1)  Judge Chouteau has mistakenly written off Shollenberger  Park and the upper Petaluma River as an industrial, blighted area that  merits no further protections or care.  This is ­ contrary to its status  as the most popular park in Petaluma and a recognized National  Geographic destination.

2)  He chose to overlook the increased  health risks caused by toxic air pollution from many thousands of  Dutra¹s diesel trucks, tugs and asphalt manufacturing. He has  rejected  the legally required standards for measuring toxic emissions from the  project at its proposed location. He asserted that CEQA cannot be used  to address impacts to workers' health at the plant.

3) Despite  Shamrock Materials sworn unwillingness to allow their dock to receive  Dutra¹s aggregate deliveries, Judge Chouteau accepted the County¹s  argument that the project could be approved as river dependent.

4. He failed to address what would happen after the first three years  with Dutra’s truck-only deliveries of aggregate, as permitted by the  County, if no barge delivery through Shamrock's permitted tonnage  capacity was agreed to or feasible.  Will Dutra be shut down without  river deliveries? Or will they just continue with thousands of truck  trips? He refused to tell us how that should or would work.

5. Judge Chouteau refused to respect the integrity of the countywide  voters' 1998 approval of Measure D, establishing the Petaluma/Novato  Community Separator.  This voter-approved  mandate, like Urban Growth Boundaries for all our cities, protects the entrance to Sonoma County, from the county line to Petaluma's Urban Service Boundary, from intensified development along the 101 corridor.  The County, and now this judge, have mistakenly left  Dutra's parcels unprotected against industrial development with an asphalt factory.


The plaintiffs' coalition of non-profits, individuals, and the City  of Petaluma will now consider the next steps, including possibly  appealing Judge Chouteau’s ruling. Our attorneys at Lozeau/Drury feel we  have many legal issues that could find merit at a higher court. So far,  we believe that this judge’s decision should be overturned.

The  community’s efforts to save Shollenberger Park, our River, Petaluma's  health and economic vitality are not over yet.  Our city, community and  extended family have supported these battles for several years, and will  not give up now.

Your donations to fund the appeal are requested from all of you who  love Shollenberger Park, value clean air, and what makes Petaluma  attractive and strong.  We are offended by Dutra's  two 62 ft. asphalt  storage towers and thousands of trucks wafting trails of toxic and  stinking  asphalt smoke as a landmark marking the Gateway to our fair  city and county.

We will never give up fighting to preserve and protect Shollenberger Park.