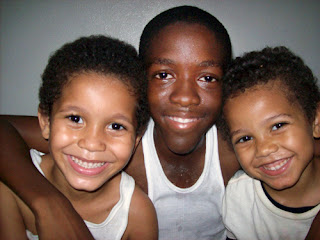 The emotions and legalities of adoption are explored during
National Adoption Month in November
on KRCB Public Television 22.
November 4 at 9:00pm - POV: Off and Running
November 11 at 9:00pm - POV: In the Matter of Cha Jung He
November 14 at 10:30pm - Adopted: for the Life of Me

Read summaries of these shows below.


November 4 at 9:00pm - POV: Off and Running
Off and Running is the story of Brooklyn teenager Avery, a track star with a bright future. She is the adopted African-American child of white Jewish lesbians. Her older brother is black and Puerto Rican and her younger brother is Korean. Though it may not look typical, Avery's household is like most American homes -- until Avery writes to her birth mother. The response throws her into crisis. She struggles over her "true" identity, the circumstances of her adoption, and her estrangement from black culture. When it seems as if her life is unraveling, Avery decides to pick up the pieces and make sense of her identity, with inspiring results.
http://www.pbs.org/pov/offandrunning/film_description.php

Her passport said she was Cha Jung Hee. She knew she was not. So began a 40 -year deception for a Korean adoptee who came to the United States in 1966. Told to keep her true identity secret from her new American family, the 8- year-old girl quickly forgot she had ever been anyone else. But why had her identity been switched? And who was the real Cha Jung Hee? In the Matter of Cha Jung Hee is the search to find the answers, as filmmaker Deann Borshay Liem (First Person Plural, POV 2000) returns to her native Korea to find her "double," the mysterious girl whose place she took in America.
http://www.pbs.org/pov/chajunghee/film_description.php

What would it be like to never know who you were when you were born? The film follows Dave as he embarks on a journey to find his birthmother. Along with the heartwarming stories of Joe and a half dozen other adopted citizens, Dave's saga illuminates the impact secrets can have over an entire lifetime. With its unexpected and moving conclusion, Adopted: For the Life of Me is one of those films that will stay with you long after you witness it. http://www.adoptedforthelifeofme.com


KRCB Public Television broadcasts from studios in Rohnert Park, California on digital channels 22.1, 22.2 & 22.3 and is seen over-the-air throughout much of the San Francisco Bay Area. KRCB is also seen on Channel 22 via Comcast Cable and Dish and DirecTV satellite services across the entire San Francisco Bay Area. If you enjoy this quality programming, please support KRCB at http://www.krcb.org