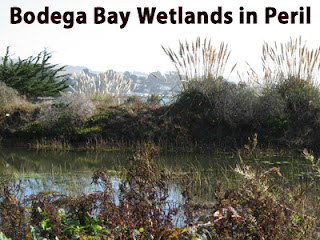 By Rebecca Beavers
We have lived on the sand dunes on Bay Flat Road for the last ten years, long enough to appreciate the unique wonder that is the surrounding ecological system that exists here. The Rail Ponds, originally part of the harbor’s shoreline, were cut off from the harbor during the 1960’s when PG&E’s attempt at a nuclear power plant left Westshore Road built across the wetland. Cut off from the harbor, except for one culvert each, these ponds are still tidally influenced. Trouble has come again to this wetland.

The “Bay Flat Well Project” proposed by the Bodega Bay Public Utility District (BBPUD), will be detrimental to the surrounding Wetlands and Riparian Area. This Bay Flat Well “footprint” is to be on a narrow strip of private properties at the north end of Bodega Harbor between the Rail Ponds and the State Park. The well will be approximately 300 feet north of the Rail Ponds, and 100 feet south of the State Park. The Well project currently involves eminent domain proceedings on six private properties.

In a 2008 BBPUD report assessing the wells in Bodega Bay, Bay Flat Road is shown to be part of the Dunes Well Field. This report states that the “Groundwater flows from north to south across the Dunes well field and discharges into the Bodega Harbor.” And “… additional production proposed near the Dunes Well Field will decrease groundwater discharge to Bodega Harbor…” Nowhere in this document does it mention that this water is flowing into the Rail Ponds. This pond habitat area is home to, Virginia Rail, Sora Rail, California Grey Fox, frogs, snakes, Osprey, herons and egrets to name a few. The Audubon Society has regular walks and viewings at the Rail Ponds. 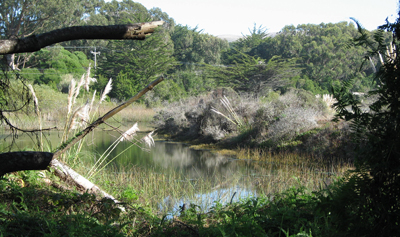 The proposed wellhead site is located on a sand dune, directly on the San Andreas Rift Zone. The well site is 30 feet south of a basin area, an untouched wildlife wetland habitat extending east to west across the back of our properties and touching the Park to the north. California quail and Grey Fox regularly emerge from this overgrown basin area.

The great number of large old trees in this area provides stability for the dunes and habitat for the abundance of birds. Trenching will be required in these tree roots, yet these trees are not even mentioned in BBPUD’s permit application.


Within the Dunes State Park, north of the proposed well site the BBPUD has two operating wells. In October 1979 the STATE OF CALIFORNIA, created the “SONOMA COAST STATE BEACH AGREEMENT”, allowing BBPUD to place a number of wells within the State Park.

The freshwater “lakes” that old-timers claim existed seasonally within the Dunes Park have not been seen for many years. What did the State discover in the required monitoring studies that lead them to amend and reduce the water limit for BBPUD? This is a question that the State Park’s district office has been unable to answer for us.

A recent document from BBPUD states this new well will be shallow, 75 to 100 feet, producing 150gpm. This anticipated water draw will more than double BBPUD’s current average removal from the Dunes Well Field, a large portion of which would have flowed south to the Rail Ponds.

The North edge of the Rail Ponds provides a dense habitat of plants whose root systems are dependent on the freshwater flow from the Dunes to prevent salt water intruding into their roots.

In June 2008 the BBPUD declared itself lead agency and posted a Mitigated Negative Declaration on Bay Flat Road. But CEQA was not properly completed. As a result of omissions no EIR was completed. No wetland or Habitat areas were mentioned on the permit applications. Due to these lapses PRMD asked for further studies.

Ignoring public comment and hoping to force the Well’s approval BBPUD proceeded with eminent domain proceedings against us in the Fall of 2009 In Fall 2010 our attorney asked the PRMD to assume Lead Agency and require a complete EIR as required by CEQA law. The PRMD refused and instead has begun a “subsequent Mitigated Negative Declaration” on BBPUD’s behalf.

December 14, 2010 the BOS voted to assume “original jurisdiction” there will be a hearing before the BOS likely in February 2011. Meanwhile we are held hostage by the BBPUD’s eminent domain suit.

There is no water shortage at this time in Bodega Bay. The new well and water being requested by BBPUD are meant to satisfy the County’s total “buildout” plan for Bodega Bay and satisfy CDPH’s “maximum day demand” requirements for that “buildout”.

Without the protection of an EIR the community will not get to hear the required alternatives that are provided in such a report.

BBPUD’s entire planned capital budget of $315,000 has been spent. The rates have been raised to cover this. Still no permit has been received.

At a recent eminent domain case hearing I told my attorney, “They mean to punish us for revealing the environmental issues.” He said “No—they mean to crush you. If they cared about you they would punish you. They do not care about you or the environment.”

It is the multitude of small wonders such as the Rail Pond wetland habitat that creates the grand scene that is Sonoma’s coast. The remaining freshwater flow to this small wetland jewel is essential to it’s’ survival. Please do not allow your beautiful coast to be further compromised by a push to “buildout”— when apparently a wetland habitat is the only means of facilitating that growth.

It is my sincere hope that for the long term health of the delicate ecosystem that is the Rail Ponds and the Dunes, that the BOS will not allow this unfortunately placed well to proceed.


For more information and to keep track of this on-going project - please visit:
bodegabayrailpondsprotection