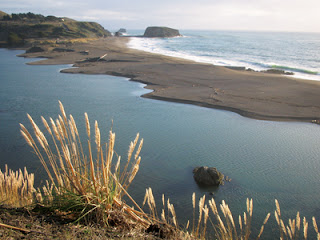 Who in Sonoma County has not witnessed the magnificent splendor of crashing waves at the merging of the Russian River and the sea? Who has not watched the tides wash along the sand, painting brief and ever changing images before immediately disappearing again? Who has not viewed the chubby new seal pups snuggling at their mother’s side, or the gulls joining in wide swoops as they dance in the sky, proof that Mother Nature’s artistry is unmatched and her ordering of the elements, profound.

Natural environment under siege….
This magical spot in Jenner is one of the natural wonders that makes Sonoma County such a wondrous place. Yet gradually our earthly heritage is being chipped away. Gravel-mining projects that tear up habitat, water use practices that cause severe shortages at critical times, ocean conditions that threaten many life forms, riparian destruction that causes water temperatures to rise, bacteria to grow, and algae to form, are all having a detrimental impact on disappearing fish.


Don’t we all appreciate fish, and salmonids especially? Their health is a prime indicator that all is well with both our ocean and river environments. Unfortunately, it is clear that the habitat is in trouble. Given that this estuary project to maintain a closed lagoon is being pushed through in piecemeal fashion, it will not address the big problem, but may instead create new problems for salmonids and other species. The Estuary Project as described here, is unlikely to accomplish the goals of the Biological Opinion, the source of the project.

Low Flow impacts ignored….
The design of structural barriers (man made dunes) to keep the river’s mouth closed all summer is the central focus of the “Russian River Estuary Management Project Draft Environmental Impact Report” (DEIR). The DEIR considers several alternatives for construction of the barrier, with the “Reduced Project Alternative” considered the environmentally superior project. What is NOT studied is lowered flows from Dry Creek to Jenner, which NMFS has determined to be necessary for project feasibility. That will be studied in a separate environmental review, not to be released for at least 1.5 years.

On December 15, 2010, the Board of Supervisors authorized the release of this Sonoma County Water Agency (SCWA) document. You can purchase a CD of the Estuary Project DEIR for $10 by contacting Jessica Martini-Lamb at: Jessica.Martini.Lamb@scwa.ca.gov Public comments are due on February 14, 2011. A hearing will be held in Jenner on Tuesday, January 18, 2011, at the Jenner Community Hall at 6 pm (behind the fire house). Please try to attend.

Estuary Project and low flow must be studied together….
The Californian Environmental Quality Act (CEQA) requires that the whole of a project be considered in one EIR. This DEIR claims that its major purpose is to address the requirements of the Biological Opinion (BO), issued by the National Marine Fisheries Service (NMFS) in September, 2008. The BO requires that SCWA apply to the State for a change in minimum flows that would be reduced from 125 cubic feet per second (cfs) to 70 cfs throughout the lower river. Until a permanent change is made, SCWA must apply for low flow on a temporary annual basis. These annual applications can be repeated indefinitely and are not subject to environmental review.

Environmental review of flow changes will be considered separately, as mentioned earlier. Several major studies have been conducted to support that later document, but the results have not even been released to the Regional Water Quality Board or the public. It is likely that the information will be withheld until after the comment period closes for the Estuary DEIR, even though the two projects are closely linked and should really be treated as one. 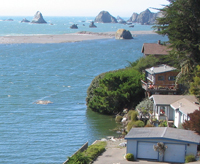 The major purpose for lowering Russian River flows is to prevent flooding of a few properties in the Estuary while still keeping the mouth closed. SCWA has historically breached (opened) the estuary at levels from 4.5’ to 9’ as measured at the Visitor’s Center, which is the lowest structure. It floods at 9’. The DEIR concludes that 78 properties would be inundated at 9’, but only nine of those parcels contain structures that would be affected. Seven of the structures are boat docks or ramps and only two structures subject to flooding at 9’ are buildings. The preferred alternative expects to manage levels at 8’ however, so these two buildings would also not be affected. One could conclude that “low flow” serves no purpose whatsoever.

In 2010, flows at Hacienda averaged 260 cfs for the entire summer period, even though the State Water Board had issued a Temporary Urgency Flow Order that called for 70 cfs at Hacienda and Dry Creek. In spite of significant reductions in dam releases by SCWA, water from the tributaries and groundwater filled the local streams anyway. In other words, a rainy winter and spring appears to override any manmade controls of flow. It’s possible that ocean conditions may be more responsible for the mouth’s opening and closing than river flows.

Proposed lowered flows, if approved by the State Water Board, will exacerbate very serious water quality problems in the lower river, particularly algal blooms. There is some concern that toxic blue green algae will take hold. Lowered flows would have a major impact on recreation and the local economy, not to mention all the other species that rely on a healthy river system to survive. Yet none of this will be considered until after this project is approved. Please demand that both projects be considered together (Jenner Project and flow alterations).

RRWPC is planning a target letter on this issue to send to County officials. Please contact us at rrwpc@comcast.net for more information. The LETTER is posted below so that yo can copy the text - and revise it for your own perspective.

Brenda Adelman has been head of RRWPC since it was founded in 1980. She can be reached at rrwpc@comcast.net

I wish to express my concerns about the “Russian River Estuary Management Project: Draft Environmental Impact Report” released on December 15, 2010. Please put my name and address on your notification list for all meetings and documents related to this project.

I am concerned about the bifurcation (separation) of the Estuary Project from the “Fish Habitat Flows and Water Rights Project”. The stated purposes of both projects is to fulfill requirements of the Biological Opinion (BO), which assumes that river flows must be managed to allow formation of an estuary lagoon to provide habitat for threatened fish.

Please address the issues below:
• CEQA requires that the entire project be considered in one environmental document. “Low flow” is inexorably linked to the Estuary Project through the BO. It is wrong to bifurcate the process.
• Estuary Project only analyzes impacts to Duncans Mills, whereas impacts from closed mouth & flow alteration, affects river as far upstream as Vacation Beach.
• SCWA can’t control flows at Hacienda during wet years as evidenced in 2010 when dam releases were reduced and flows averaged 260 cfs from June through September. This project is only viable during drought years when water quality impacts would be greatest. This should be analyzed in light of BO requirements.
• When flows are lowered in dry years, the river mouth usually stays open anyway as evidenced in August, 2009 when flows averaged 63 cfs all month.
• The preferred project maintains estuary levels at 8’. No buildings would be flooded at this level, making low flow unnecessary for this purpose.
• I am concerned that water quality monitoring studies in 2009 were inadequate, and that data for 2010 has not been made available to the Water Quality Control Board or the public. The outcome of water quality studies will not be available until the EIR on “low flow project” is released in 1.5 years. This is unacceptable.
Sincerely,